View from NZ press: All Blacks expecting a real challenge

“This was always going to be this year’s pinnacle assignment” 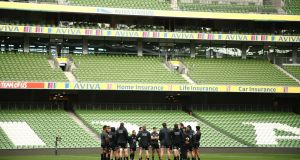 For Ireland, Saturday’s Test match against the All Blacks will bring about the usual feelings of trepidation, metered with a certain degree of confidence.

Previous visits of New Zealand would bring a mixture of fear and intrigue - nobody really expected to beat them, but what’s the harm in having a go?

However, Ireland’s 2016 win in Chicago - and the two stunning years which have followed, particularly 2018 - have shifted mentalities and shifted the goalposts somewhat.

This time, the back-to-back world champions will take to the pitch in Dublin knowing they are facing the second best team on the planet. Not direct peers - but not too far off it.

Implicit trust in Joe Schmidt, his system and his flourishing squad have led many pundits in Ireland and around Europe to believe Ireland are capable of causing an upset, and laying down a marker ahead of the 2019 World Cup in Japan.

But while the likes of Gordon D’Arcy feel Ireland can win, do the Kiwi media also believe the mighty All Blacks could be about to meet their match?

Not necessarily. Writing for the NZ Herald, Liam Napier suggests the All Blacks are at their best when rising to a challenge - and challenges don’t come much bigger than the one waiting for them under the Lansdowne Road lights.

He writes: “This was, after all, always going to be this year’s pinnacle assignment. As if Ireland weren’t enough on their own, it is telling the All Blacks raised the stakes internally, and then publicly, by declaring whoever prevails in Dublin will be considered the world’s best, regardless of rankings.

“The All Blacks didn’t have to put that message out there. That they did was another calculated ploy. They wanted to heap further pressure on themselves to perform; to maintain their status.”

Wynne Gray, also in the NZ Herald, believes the absence of Conor Murray - with Ireland’s nine out injured - could knock Ireland’s “offsiders” off course on Saturday.

“Ireland have risen to the second-rated side in the world through the discipline instilled by coach Joe Schmidt and his offsiders, while that cohesion has been driven on the park by Murray with his skilled tactical clarity at the hub of the team.

“Box kicks, deft passes to runners, calling on defenders, covering tackles - the Irish halfback nails all areas and his loss will nip into his side’s purpose.”

However, Gray acknowledges the Aviva showdown is the acid test for an All Blacks side who have had a mixed season, including last weekend’s edgy win over England in the Twickenham rain.

He writes: “Coping with Ireland and everything they bring at their home patch is a massive end-of-year exam in a season of fluctuating form-lines . . . what impressions will the All Blacks give us at Aviva Stadium about their current state and their ability to stay at the forefront of their craft?”

In the wake of their contentious win over England Gregor Paul, writing for the NZ Herald from Dublin, has talked about the northern Hemisphere’s negative perception of the “cynical” All Blacks.

“Up here, the All Blacks are very much portrayed like the Gruffalo . . . a scary, terrifying beast with a big wart on their nose, prickles all over their back and consumed by truly bad intentions,” he writes.

And he looks back to the fallout from the Kiwi’s last visit to Dublin - when New Zealand won 21-9 following a brutal evening which saw Robbie Henshaw stretchered off with a head injury - to back up his claims.

“The Irish feel like they were relentlessly assaulted and the victims of multiple acts of violence. That the All Blacks stepped over the mark at times is not disputed but Ireland’s victim status is.

“But it is easier for Ireland to believe the reason they lost that day was because they were victims of foul play and weak refereeing. They riled the Gruffalo in Chicago and brought out his even darker side a couple of weeks later.

Writing for Stuff.co.nz, Paul Cully believes Ireland must improve from their performance at Soldier Field if they are to secure a first ever win over the All Blacks on home soil.

He argues Ireland’s win on Chicago was “based on the unavailability of Brodie Retallick and Sam Whitelock. ” New Zealand’s twin totems will play their 50th international game together on Saturday - so how can the hosts spoil the occasion?

Among Cully’s six-point masterplan for toppling the world champions is using the lineout drive off Devin Toner, getting referee Wayne Barnes on their side as well as using Rob Kearney to guard the flanks as Beauden Barrett kicks.

Bring on the Gruffalo.

1 Henshaw the only change as Andy Farrell names Ireland team for Paris
2 Gordon D'Arcy: Ireland must go after victory by frightening France into mistakes
3 Warren Gatland: England players could miss Lions tour if not released for Japan warm-up
4 Women’s GPA says demands on female GAA players are ‘increasingly unsustainable’
5 Cian Healy: ‘Realistically I got away with murder when I was younger’
Real news has value SUBSCRIBE