Tim Schmidt a bonus for Terenure 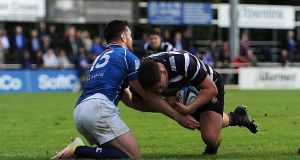 Terenure moved back to the top of Division 1A following their third straight bonus point victory, scoring 25 second half points - including openside Niall Lalor’s third try of the campaign - to overcome their local rivals 32-21 at a packed Templeville Road.

UCD’s unbeaten start was ended by Cork Constitution whose dead-eye kicker Tomas Quinlan guided them to an 18-5 win at Temple Hill. The talismanic outhalf pinged over six penalties for the defending champions. A brace of first half tries from Ben Kilkenny, a nephew of Keith Wood, set Young Munster on their way to a 32-24 bonus point victory over hosts Buccaneers at Dubarry Park.

Goal-kicking scrum half Neil Cronin accumulated more points on his own than an out-of-sorts Clontarf as Garryowen secured a stunning 51-17 win over the north Dubliners at Dooradoyle. Cronin finished with 26 points - made up of a try, six conversions and three penalties - with recent Munster academy recruit Liam Coombes touching down twice.

Meanwhile, Shannon have gone top of the Division 1B table after running five tries past Old Wesley to win 34-17 at Donnybrook. Ireland Under-20 outhalf Conor Fitzgerald top-scored with 14 points, including an intercept try.