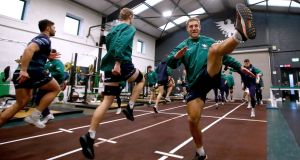 The IRFU has confirmed to its professional players that they will not be returning to team training on May 18th, as had been pencilled in six weeks ago, and hope to be in a position to outline a clearer scenario come early June based on Government guidelines.

For the time being, the players from all provinces will continue training in isolation or take holidays in line with the directives from their provinces. Leinster’s players, for example, are currently in the second week of two weeks’ holidays.

“The teams will not be returning to training on May 18th,” confirmed an IRFU spokesperson. “They will continue with either time off, annual leave or the remote training that they’ve been doing based on how their provinces are managing their time at present and then at the start of June the IRFU will come back to the players with a plan based on where things sit at that stage.”

In effect therefore, the players will continue to train in isolation for another three weeks before being given a clear indication by the IRFU as to when rugby may or may not resume.

As things stand, pending confirmation that the July tours will be called off, there remains the hope that the Guinness Pro14 might yet be able to resume in August with two rounds of regional matches, including interpros, potentially behind closed doors, before semi-finals and a final in September.

This would be a precursor to playing Test matches in October/November, but as always there are plenty of moving parts to these optimistic timelines.