Friend impressed with Arnold’s hunger as Connacht prepare for restart 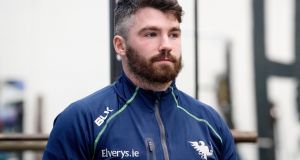 Sammy Arnold has impressed Connacht coach Andy Friend with his hunger to get involved in the first team at the Sportsground. Photograph: Inpho/Connacht Rugby

Connacht recruit Sammy Arnold has impressed his new coach Andy Friend since moving from Munster at the end of last season.

The Connacht boss has been “excited” with Arnold’s energy and drive in the five weeks since restricted training has resumed at the Galway Sportsground.

With 12 new players in the senior squad, Arnold, who has one cap for Ireland, is one of five centres bidding for a starting berth this season.

“From the minute I met Sammy, I couldn’t be more impressed with him,” says Andy Friend. “ He’s driven, really hungry. His birthplace is England, but he’s made Ireland his home, and to know he chose Connacht to play his rugby is an indicator he is still hungry and wants to put on the Ireland jersey.”

With Bundee Aki, Tom Farrell, Tom Daly and Peter Robb in situ, Friend says midfield is one of Connacht’s healthier positions, and Arnold knows he will have to play well to get into the Connacht jersey.

“He’s a young man who loves a challenge. He wants to push himself and challenge himself, and I am really excited by him – the energy he brings as well as his on-field ability.”

Two new recruits, backrow Abraham Papali’i and wing Ben O’Donnell have yet to join the squad. Papali’i arrived in Galway earlier this week, so will be unavailable until his self isolation is completed, while O’Donnell is due in September.

Friend says his new-look squad, which boasts 12 new additions, has never been in better shape since returning to the Sportsground from Covid-19 lockdown. During that time Connacht put in place special measures to deal with possible mental health issues.

“There was concern across the whole programme for people’s mental health because everyone was in a different situation. The first message we sent our to players and to staff was “Number one, look after yourselves. We don’t know how long it will be like this, but make sure you and your families are safe.

“We were really explicit in sharing that with players and staff. We had support networks behind that and we developed through the leadership group touch points where all players were contacted by certain leaders, and that would adjust and change. We made sure we stayed in touch with everybody. I feel as though we handled that really well,

“So it was as tricky period, but at the same time, the proof’s in the pudding. They have come back, they have a buzz about them, there’s really good energy here, and I think we probably handled it the right way.”

Friend says there is now great hunger in his squad after four months out of action as they prepare for the two interprovincials which will complete the Pro 14 season.

“A lot of players have used that time really well to allow their bodies to recover and then build again. We have seen players come back in great shape, lean muscle mass increase has been incredible, they are coming back feeling good, so the body has got better, and with that the mind has got better, and then the hunger to get back in.”

Although uncertain how the new season will look, Friend believes he now has a good mix of youth and experience with “genuine for competition for every spot”.

“Oisín hasn’t trained, but Conor Oliver, Arnold, Alex Wootton, and then the young blokes from the academy, have been great. Across the board we have a got a group of players hungry to get back. They’ve worked really hard, and I’ve never seen them in a better state to be honest.”