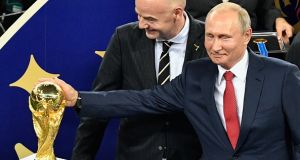 Russia would use the stadiums from football’s 2018 World Cup as venues in their bid to host the Rugby World Cup. File photograph: Getty Images

The Russian Rugby Federation (RRF) has confirmed the country is preparing an application to host the 2027 Rugby World Cup and that President Vladimir Putin is backing the bid.

Russia had expressed an interest in hosting the tournament, using the stadiums from football’s 2018 World Cup as venues, and the RRF said in a statement it had set up a committee to handle the application process last week.

The official bidding campaign is set to begin in February with the sport’s global governing body World Rugby expected to decide the hosts next May.

“The necessary consultations were held with the participation of the ministry of sports. By the end of this year detailed information and criteria for the application are expected,” the RRF said.

The initiative had received the support of the Russian president, it added.

Australia, co-hosts of the inaugural World Cup with New Zealand in 1987 and the venue for the successful 2003 edition, are the favourites to host the 2027 showpiece with Argentina pulling out earlier this year.

France will host the next World Cup in 2023, which will be the third in a row in the northern hemisphere after England in 2015 and Japan last year.

Russia finished bottom of their group in Japan after losing their four games.