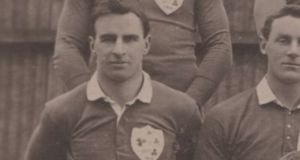 A number of writers have inscribed the pedestal upon which they placed James Cecil Parke with the words, ‘Ireland’s greatest sportsman,’ an assertion that carries reasonable weight by dint of his considerable success in a number of sports but one that is, on the basis of comparison, slightly subjective in nature, however scrupulous.

Attaching a value to achievements borne in different times and across sports, differentiating between the amateur and the professional eras, is fundamentally a matter of opinion but any discussion on that putative title would most certainly include Parke. He might be aghast as he was known for his sportsmanship and modesty.

A shorthand biography highlights those credentials; an Olympic silver medallist (1908), the 1912 Australian Open singles and doubles champion, a Wimbledon Mixed Doubles winner (1914), on eight occasions the Irish Open singles winner, a European champion, a Davis Cup winner, all in tennis.

He played golf for Ireland against Scotland and England in 1906, was a first class cricketer, by popular account a chess prodigy and won 20 caps for the Ireland rugby team between 1903 and 1909 - translated into modern values would be closer to a hundred - scoring 36 points, including two tries.

Parke, known as Cecil or JC to his friends, was born in Clones on July 26th, 1881, one of eight children to William and Emily (nee Pringle). His father had moved to the Monaghan town from Longfield Lodge in Leitrim where he met and married Emily, originally from Emyvale.

Parke’s sister, Maud was grandmother to another very famous Irish rugby player, the late Cecil Pedlow, an outstanding centre who won 30 caps for Ireland between 1953 and 1963, and toured South Africa with the British & Irish Lions in 1955, playing in the first and fourth Tests.

The tennis genes were also evident as Pedlow, aged 17, competed at Junior Wimbledon having won the Irish Under-18 title at Fitzwilliam a couple of months earlier. He played Vets tennis for his country and also represented Ireland at squash.

Parke’s first brush with fame if not fortune came as a nine-year-old when he represented Clones in a Leinster region chess tournament for adults, “so tiny that he had to be lifted onto the pony and trap on his way to take part in the competition.”

But it was on the sports fields, initially at Portora Royal School in Enniskillen, that his athletic prowess was quickly revealed. He won his first senior tennis trophy as a 19-year-old in Clones Lawn Tennis club in 1900 and three years later was beaten in the Irish Open singles final at Fitzwilliam.

He won the national title in 1904 and 1905 and six times in succession from 1908 to 1913; his tally of eight singles victories is the most by an Irishman in the history of the tournament. In 1907 the European Championships took place at Fitzwilliam and Parke won the title.

Studying law at Trinity College, he played rugby for the university from where he was first capped for Ireland against Wales in Cardiff in 1903 and latterly for the Monkstown club. Strong, very quick, a punishing tackler and a fine place-kicker and punter, he was a mainstay in the Irish centre for six years, captaining his country on three occasions.

He scored two tries - against Scotland and England - and amassed 36 points in his 20 caps and took part in some notable matches during that era. Parke played against New Zealand’s ‘Originals’ as they came to be known, under the captaincy of All Black legend, the Donegal born Dave Gallaher - he missed that game through injury - at Lansdowne Road in 1905.

The following year he played a central part in helping the national team to defeat a Triple Crown and Championship chasing Wales at the Balmoral Showgrounds in Belfast, a feat make all the more remarkable when losing their halfbacks Bill Brooke Purdon (broken leg) and Tommy Caddell (broken ankle) and so were down to 13 players in a 13-6 victory. The rugby writer EHD Sewell described it thus, “the greatest of all wins in international or any other rugby.”

Eight months later at the same venue it was a thumping Parke tackle that pre-empted a length of the pitch try from the white-gloved, Irish wing, Basil MacLear in a 15-12 defeat to South Africa. Parke’s last cap was against France in 1909, kicking a penalty and a conversion in a 19-8 victory at Lansdowne Road.

It came a year after he won a silver medal at the 1908 London Olympics when runner-up in the Men’s Doubles with Major (his name, not a military rank) Josiah George Ritchie, the singles champion. He made it to the third round of the singles before losing to Germany’s Otto Friotzheim the contest described in the official Olympic report as “the match of the whole Olympic Tournament.”

In 1912 he spent six weeks travelling to Australia and New Zealand by ship and was a member of the ‘British Isles’ tennis team that beat defending champions, Australasia in the Challenge Round of International Lawn Tennis Challenge, a forerunner of the Davis Cup.

Parke beat the Australian number one, Norman Brookes, a two time Wimbledon singles champion and with the tie poised at two matches apiece triumphed in the pivotal rubber against Rodney Heath. It was said at the time ‘that Ireland with the help of England won the Davis Cup.’

The following is taken from a report in The Australian newspaper describing his victory over Brookes. “Parke’s drive has been described, analysed even christened, ‘Irish.’ The secret of it lies in an immensely strong and well tempered wrist. He does it equally well on either hand, and in any position, standing, walking or running at top speed.”

The Irishman offered a more prosaic appraisal. “My four-leaved shamrock (he wore it for every match) pulled me through.” He wore it sewn onto his shirt and its source was described by Ulick O’Connor, the author of a book The Fitzwilliam Story as “it had come in the morning post in a box with a message in a feminine hand inside. ‘Play Up. Good luck.”’

The Monaghan native stayed on and won the singles and doubles in the Australasian Open as it was called at the time, and American Lawn Tennis, the official organ of the US LTA chose him as the best player in the world as he beat the next four in the rankings, Brookes, Anthony Wilding, Maurice McLoughlin and Richard Williams at various stages of the season.

Parke continued to win tournaments abroad, twice reaching the semi-finals of the Wimbledon singles but in 1914 he managed to claim a title at the All England club, winning the Mixed Doubles in partnership with the 1912 ladies singles champion, Ethel Larcombe.

At the start of World War 1, Parke enlisted in the Leinster Regiment (Royal Canadians) with the rank of captain (1914) and in switching to the Essex regiment was promoted to Major (1917). He was wounded twice, at Gallipoli and on the Western front, and was ‘mentioned in despatches’ for his bravery.

His Wimbledon swansong in 1920 was to provide a memorable postscript to a career interrupted by war. At 39-years -old, and ranked four in the world, he beat the USA number one Bill Johnston before, losing out to another American, the great Bill Tilden, the eventual champion. Parke did reach the Doubles final in partnership with Algernon Kingscote, but the pair were beaten in four sets.

The British tennis writer S Powell Blackmore said of the Irishman: “Parke is one of the world’s greatest fighters, not on account of his cunning, but because of his daring strokes when cornered. Parke is most dangerous when his opponent thinks a shot has beaten him. It is not his tactics, it is his sinew, superlative nerve and the heart of a big sportsman.”

He married a Welsh girl, Sybil Smith, in 1918 and two years later went to live and joined a law practice of Chamberlain and Johnson in his wife’s home town of Llandudno. He instigated the development of the local municipal tennis courts and was a chairman of the North Wales golf club. He suffered a heart attack while walking on Mostyn Street in the town and died, aged 64, in February, 1946.

He is buried in the Great Orme cemetery in Llandudno. A number of Parke’s trophies are on display in the Monaghan County museum, bequeathed by a niece. UCD’s Adam Darnell made a short film about Parke’s life in 2015.

By any yardstick he enjoyed a remarkable sporting career and where they might place him in the pantheon is a moot point, but if there was to be a debate as to the Ireland’s greatest sportsperson, he would have to be front and centre.

Keith Duggan: Through the glories and the disgraces, we were all Maradona addicts 20:30
Manchester City cruise into last 16 with win in Greece 20:29
Rapid Vienna v Dundalk preview 20:27
Andy Farrell to delve deeper into Irish squad for team to play Georgia 19:42
Pele leads Maradona tributes: ‘One day, I hope we can play football together in the sky’ 18:38
Crossword Get access to over 6,000 interactive crosswords