Leo Cullen: playing rugby without fans is better than nothing 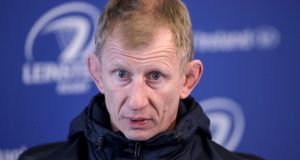 Despite the gloomy prognosis from the Minister for Health Simon Harris that mass gatherings may be not be possible by the end of the calendar year Leo Cullen has said that Leinster and the other provinces will continue to prepare as best they can for a return to action whenever that may be.

That said, Cullen admitted that rugby as a sport and the Pro14 as a competition will face particular difficulties.

“We’ll adhere to all the various guidelines that are recommended,” said the Leinster coach, adding: “Obviously with the health minister and all the relevant health authorities, and how that interaction happens with the different sporting bodies, we’ll see.

“You know as much as I do at this point in time. For us we are trying to focus on making sure we have a good quality programme for the players to work on remotely. We are fortunate in that we have a relatively stable playing group and management staff as well.

“We’re just trying to make the best of the situation we face into and being ready to come back whenever that is and what that format even looks like. Clearly with mass gatherings there is going to be challenges for all sports and we will try and do what is best for the group and for everybody.”

Whenever rugby games do return the likelihood is that they will be held behind closed doors, something which the Leinster coach was phlegmatic about.

“We will just get on with that if that is the arrangement. It will be a slightly different situation if that was to take place,” said Cullen.

“We’ve all been involved in training games and pre-season games where there is not that same crowd atmosphere as at games. It takes away from what supporters bring and we have been incredibly lucky over the last number of years in terms of the involvement our supporters have had but it would be better than nothing and it would allow us to get the sport back up and running.

“At some point you’re going to have to get back playing and get back training even in smaller groups. It’s just a gradual build-up of whatever that all looks like. There may be complications in cross-border competitions,” admitted Cullen, in reference to the Pro14, which has 14 teams representing five different unions and federations, although even the anticipated return of interprovincial games has its own complexities given Ulster is operating under different government and health guidelines in the battle with the Covid-19 pandemic than the three provinces in the Republic of Ireland.

“We have four interprovincial teams on our doorstep and then our club scene as well and what does all that look like and what is the level that we come back at? It is import that we are open-minded to the best solution and the decisions that have to be made to make the best of the situation we are in.”

Rugby, as much as any team sport, would have particular difficulties given its contact nature, albeit Cullen noted: “Most team sports there is going to be some level of contact so what all that looks like is still very much unknown.

“The actual challenge of playing the game itself we will see. There is probably going to be other sports back up and running before us so we will see how a lot of that materialises. We’re just trying to put a plan around the playing group.”