The Offload: Ireland not at required pitch for pressure game 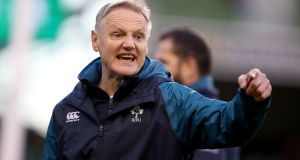 Joe Schmidt: “We were very quiet before the game. I didn’t sense the same energy levels I would have in November when the All Blacks came.” Photograph: Dan Sheridan/Inpho

Psychological warfare is an Eddie Jones delicacy, all the way back to 2003 when he haunted Clive Woodward’s England up until Jonny Wilkinson intervened.

Nobody spies on anyone anymore, “hand on heart,” said Eddie, but England knew all about Robbie Henshaw training at fullback a few miles up the Algarve coastline.

Target your opponent’s Achilles heel (oddly, Joe Schmidt yet again revisited Murrayfield’s delayed bus journey from 2017 when noting Ireland’s propensity for slow starts). On Saturday England’s team bus arrived early and coincidentally, or not, at the same time as Ireland. Nobody blinked as the problem was quickly solved.

In the pre-game huddle all the leadership voices – Peter O’Mahony, Johnny Sexton, Rory Best – rattled off instructions. This seems small, irrelevant even, yet it looked different from the usual singular message delivered by one man. Press box nerds watch through binoculars. The group traipsed off the pitch in dribs and drabs as Sexton, Keith Earls and Joey Carbery stalled for various reasons (again, a tiny abnormality but noticeable).

“We were very quiet before the game,” Schmidt admitted. “I didn’t sense the same energy levels I would have in November when the All Blacks came. If you don’t have that mental preparation done it is pretty difficult to get a foothold back in the game.

“I didn’t sense it, I didn’t feel it, you almost get this vibrancy from the group and we didn’t have it tonight. We are talking about human beings here. There is emotional energy that needs to be switched on collectively.”

Correct, human beings, not machines. The switch is psychological. New Zealand coach Steve Hansen was on the money last November. The pressure of being number one brings a different sort of weight.

“Let’s see how Ireland handle it,” he said.

They stumbled at the first fence.

Number – 27 Mako Vunipola tackles against Ireland. Has to be a prop’s world record.

Quote “Yeah, it was a reality check. That’s how it is going to be at the World Cup.” – Joe Schmidt looks into the future.

Advertising certainty: boring doesn’t sell. Actual reality: addiction is real. It seeps into every pore of our society. It rips families apart. Gives nothing back. The bookmakers’ campaign around the Ireland versus England game was expensively loud and unavoidable with pop-up joke shops that tapped into our light-hearted nature.

Brexit gags aplenty and open digs at English visitors but know this for what it really is: Cash-rich and able to buy the biggest spaces in print and online with gross, nasty billboards on the walk towards the Aviva Stadium.

“Passport Office – ENGLAND FANS: leave Dublin with a consolation prize!” The mock passport office was erected beside a well-known D4 watering hole that thousands had to pass en route to the game.

“Dear England, sorry for the last two years of pain, suffering and humiliation. Another 798 and we’ll be even,” read full pages in tabloids. Another hoarding: “Just try putting a tariff on this Irish beef” the cows being Irish rugby players.

“Welcome to the biggest English-speaking city in the EU,” read another sign over the old Kiely’s pub, telling us all we need to know about how they want to portray Irish people. All a bit of craic, yeah?

“Anyone know a company that can take down a few large billboards in Dublin ASAP?” came the hilarious Saturday night tweet. “Asking for a friend.”

Fuelling addiction is far from boring. Back slaps all round.

One crest for men:

If she can’t see it she can’t be it. A wise owl at Donnybrook on Friday evening looked at the crest on the Ireland woman’s jersey and wondered: ‘Why is it not the same as the senior men’s team?’

Despite a superb individual display by former captain Claire Molloy, Ireland lost 51-7 to a fully professional England side who proudly wear the same jersey and red rose design we saw at the Aviva Stadium.

The Ireland woman’s jersey have the white circular crest with green shamrock. Same as the male development sides, like what the under-20s wore for their famous victory in Cork. We asked the IRFU why this is the case.

“It’s the logo we’ve traditionally used” was the answer given.

Rory Best’s men wear a special crest that doesn’t have “men” stitched underneath it.

In Saturday’s match programme you may have noticed the IRFU management committee (nine men) and IRFU committee for 2018/19 (22 men and two women since Su Carty’s recent addition). Irish rugby has signed up to the #20x20 campaign but a promise to fill the blazer squad with 20 per cent female presence is not part of the deal. Still, the imagery is stark. Long way to go but eight per cent is a start.

1 Trump in the rough over playing golf and US Covid-19 fatalities
2 Two in custody in Tour de France doping investigation
3 The Offload: Saracens prove Pro14 is not fit for purpose
4 Awarding of 2023 Rugby World Cup to France part of Laporte investigation
5 Suarez’ Italian language exam rigged according to prosecutors
Real news has value SUBSCRIBE