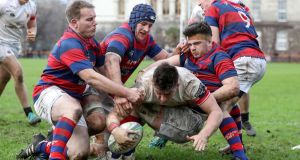 Three teams in the lower half of All-Ireland League Division 1A all won on Saturday as UCC and Dublin University claimed the scalps of Lansdowne and Clontarf respectively, while bottom side Terenure College swept past UCD for their first victory since October.

Young out-half James Taylor produced a man-of-the-match performance to pilot UCC to a tremendous 25-22 win over Lansdowne at the Mardyke. The defending champions came away with two bonus points, but Brian Walsh’s charges, who have climbed out of the bottom two, triumphed thanks to Taylor’s 10 points with the boot and tries from Matt Bowen, Brian O’Mahony and Michael Clune.

Trinity completed a superb season’s double over Clontarf with a 29-21 bonus point success at College Park where number 8 Niall O’Riordan notched an 80th-minute match-winning try. Prop Giuseppe Coyne, who is part of the Ireland Under-20 Six Nations squad, started the try-scoring in the 21st minute before the students bounced back brilliantly from 14-7 and 21-19 deficits.

Ireland head coach Joe Schmidt’s son Tim touched down twice in Terenure’s impressive 49-21 dismissal of UCD at Lakelands, while JJ O’Neill took his league tally to six tries with a brace in Cork Constitution’s 31-5 bonus point victory at Young Munster. Con are eight points clear at the summit, heading into the break for the Ireland Club international games against Scotland.

Meanwhile, Ulster hooker Adam McBurney crossed the whitewash as Malone won their top of the table clash in Division 1B, prevailing 21-17 at Old Wesley to move two points clear in the promotion race. Another of the province’s front rowers, Tom O’Toole, scored a breakaway try as Ballynahinch won their Ulster derby with Ballymena, 19-14.

Adam Doherty’s 75th-minute penalty guided Banbridge past St. Mary’s College on an 18-16 scoreline and back up to second place, while captain Shane Layden’s fourth try in three matches helped Buccaneers overcome Old Belvedere 20-12. Naas and City of Armagh drew 23-all with hooker Conor Doyle’s late try earning the Kildare men a share of the spoils.

Ashbourne etched their name into the All-Ireland Junior Cup record books by defeating much-fancied Enniscorthy 16-11 in rain-soaked Edenderry to become the first ever three-in-a-row champions. Their talismanic captain Gavin Kennedy kicked 11 points, including the conversion of centre Mark Rooney’s fifth-minute try from a grubber kick.