It is a headline and we are focusing on how good we can be. Let’s see how the game goes 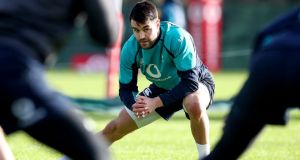 Allowing for those already ruled out of the opening exchanges in the Six Nations, such as Tadhg Beirne and Iain Henderson, Ireland have a clean bill of health and thus a full 38-man squad to choose from for Saturday’s opener against England according to assistant coach Simon Easterby.

“We’ve been very lucky with the injury list. We have a healthy squad of players and that creates competitiveness in training and healthy competition. Every team strives for depth and quality in every position and we are no different.

“The quality of our squad is strong and that is driving the standards, everyone is being kept on their toes, it is a good place to be and everyone has been training well and it has been useful.”

Against that, some players are rustier than others after recovering from recent injuries, with the team’s talisman Johnny Sexton uppermost amongst those after being sidelined for the last four weeks with a knee injury.

“Certain players need game-on-game to get a certain level but Johnny Sexton is not one of those. He has the ability to play fresh, run a team, know his detail, be across everything but also feel like he has the conditioning and fitness under his belt.

“Match fitness is second to none but we trust the conditioners and medics here and at Leinster we know we have the balance right to get him up to speed.”

The reigning Grand Slam champions begin the defence of their crown at the Aviva Stadium on Saturday (kick-off 4.45pm), and true to type in recent times the barbs have already been fired from England’s camp at the Irish style of play.

Not surprisingly, an unperturbed Easterby shrugged off the headline-grabbing comment by the England assistant/defence coach John Mitchell that Ireland “will try to bore the shit out of us” by dismissing it as just that.

“I think it’s a headline. If you read a bit more about what he said, I don’t think there’s too much more. We focus on what we do, we are good what we do and there will always be an opinion on how teams play, no matter how good or bad they are. We will take it in their stride and we will look forward to playing the game we know we can.”

Gone are the days when such pre-match comments might have been stuck to the team room wall, and nor was Easterby of a mind to take it as a compliment.

“Guys use motivation individually but for us as a squad we don’t take too much interest in what is being said outside of that. It is what it is, it is a headline and we are focusing on how good we can be. Let’s see how the game goes.”

Ireland were motoring like a well-oiled machine by the time they completed a third Grand Slam with their St Patrick’s Day win over England at Twickenham. Initially though, they were indebted to that drop goal by Sexton on the opening Saturday in Paris, although avoiding another slow start was not a primary concern according to Easterby.

“I don’t think we’ve focused on that in particular. I don’t think Paris was ever in doubt, was it?” he joked. “There will always be things in games where you can avoid being in situations. But we are approaching this Six Nations like any other. It is about England and we are looking no further than this game and making sure we have everything in order and hopefully a performance will come.”