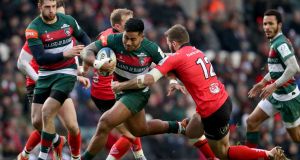 With Ben Te’o sidelined after sustaining the injury during training in Portugal, it is now all but certain that Manu Tuilagi will make his first Six Nations start in almost six years.

England’s Six Nations preparations have been dealt a significant blow by an injury to their powerful centre Ben Te’o. The Worcester player had been due to start against Ireland in Dublin this Saturday but has been ruled out of the game with a side strain, forcing Eddie Jones to reshuffle his midfield plans.

With Te’o sidelined after sustaining the injury during training in Portugal, it is now all but certain that Manu Tuilagi will make his first Six Nations start in almost six years. Jones, however, must now review his midfield options yet again and choose between moving his captain, Owen Farrell, to 12 or pairing Tuilagi with Exeter’s Henry Slade.

England’s management are understandably trying to downplay the implications of Te’o’s absence, pointing out that George Ford and Farrell were the first choice 10-12 pairing for the first two years of Jones’s tenure. It may well be that Jones has little option but to revert to that arrangement, unless he chooses to play Slade and Tuilagi together for the first time.

As well as Brad Shields and Joe Cokanasiga, both ruled out of contention by niggling injuries, Jones has released a further seven players back to their clubs. Forwards Dan Cole, Jack Singleton, Ben Moon and Ben Earl and backs Jonathan Joseph, Ollie Devoto and Ollie Thorley are all surplus to requirements, leaving 25 players in contention for England’s match-day squad in Dublin.

England have also retained all four of their available locks, clearly mindful of the line-out threat posed by Ireland, with Ellis Genge and Luke Cowan-Dickie both in line to add extra energy off the bench. No one, however, is keener for Saturday to arrive than Tuilagi, who has made only two appearances off the bench since his last Test start in New Zealand in June 2014 following a grim succession of injuries.

Now 27, there have been times when Tuilagi’s long-awaited return to the England midfield seemed destined not to happen. This season, however, he has finally managed to string together a series of games for the Tigers and looks as excited at the prospect of his 28th cap as he was before his debut in 2011. “Manu’s been looking brilliant,” said England’s assistant coach, Neal Hatley. “He’s trained exceptionally well in the midfield for us and he’s in a really good space. He’s a physical player and guys like playing alongside blokes like that. He definitely has a positive effect ? he brings a different element to how the team feels and plays.”

Jones and his staff, even so, could have done without Te’o being removed from the equation in the build-up to such a huge game. Ireland may not be too broken-hearted to see Farrell redeployed at inside centre, although Hatley denies that England’s prospects have been fatally compromised. “It’s not as big as you’d think,” he insisted. “It’s not like Ben is the only player who has run at 12 for us. We’ve tried different people in there to make sure that if something like this comes up, there are contingencies in place.”