Young back’s ability to play at centre, wing and fullback comes with a caveat 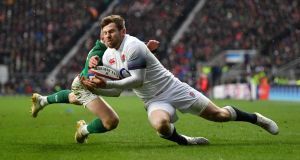 As a sportsperson versatility is a cherished attribute within the team dynamic but it comes with a caveat. Few derive any satisfaction from being in the hopper to play in multiple positions when the upshot is to be selected in none or to be shunted from one to another on a coach’s whim or in the form of a human sticking plaster.

Elliot Daly might agree. From the moment he became the second youngest player in the history of Wasps to be chosen for a senior match – it was an Anglo-Welsh Cup tie against the Exeter Chiefs – while still a schoolboy at Whitgift in South Croydon, he’s suffered a nomadic lifestyle from a positional perspective.

In six matches in his debut season (2010-2011) he lined out at centre, wing and fullback. Eight seasons on and little has changed in terms of trying to wangle the multifaceted demands of those three positions. In 14 starts for Wasps in 2018-2019 he’s worn the number 13 jersey seven times, played on the wing on five occasions and twice at fullback.

That upheaval mirrors his career in the Test arena. In 25 matches for England he’s occupied the same three positions; five at centre, 13 on the wing and the last seven at fullback, all of which were under the current head coach Eddie Jones.

Daly’s last match on the wing for England was against Ireland at Twickenham in last season’s Six Nations, a match in which he scored a brace of tries and might have grabbed a third but for a wonderful last-ditch ankle tap by Keith Earls.

Jones decided to shift Daly to fullback for the summer tour and the November Test series but in naming his squad for Saturday’s game against Ireland recalled Mike Brown and the conjecture is that the Harlequins player may start at fullback given Ireland’s aerial threat.

In those circumstances the 26-year-old Wasps player might return to the wing or could miss out altogether, when Jones names his England team on Thursday morning. He’ll have to contend with Jonny May and the free-scoring Chris Ashton, now back in the national set-up having joined the Sale Sharks from Toulon last summer, to secure one of the wing slots.

Ben Te’o’s injury means that Manu Tuilagi and Henry Slade will almost certainly form the midfield partnership. It’s only 18 months ago that Daly played on the left wing in all three Tests for Warren Gatland’s Lions against New Zealand in the drawn series, including kicking a long-range penalty in the 15-15 draw.

However, his scratchy form for Wasps of late leaves him a little vulnerable – he hasn’t scored a try in his last eight matches at club level – but it is difficult not to feel some sympathy for a prodigiously gifted player, who is expeditiously rotated through several positions in the backline.

This after all was a young man who caught the eye of Brian O’Driscoll with the former Ireland and Lions captain, who knows a thing or two about centre play, stating back in 2015: “I really like Elliot Daly; I admire the way he plays. He’s got a lovely, educated left boot and it’s nice to have that long-range aspect [for goal-kicking].”

O’Driscoll spoke about Daly’s pace, the way he carried the ball in two hands and how he had learned to be a better defender in the 13 channel. Stuart Lancaster, the then England coach, included Daly in an extended 50-man squad ahead of the Rugby World Cup in 2015 but he didn’t make the final cut.

Bath centre Jonathan Joseph’s form and try-scoring ability meant that he kept a firm grasp on the England number 13 jersey prior to injury and by that stage Daly was ensconced as a back three option.

Sent off against Argentina at Twickenham in November 2016 for tackling Pumas number eight Leonardo Senatore in the air, Daly bounced back and scored a match-winning try against Wales in the 2017 Six Nations, his excellent form recognised in being selected for Gatland’s Lions squad to tour New Zealand and his presence in all three Tests.

Daly, who has grandparents from Clare and Donegal and made a winning England debut against Ireland in 2016, has always expressed a preference for the outside centre position. The problem has been convincing others.

Wasps head coach Dai Young said in an interview in 2017 ahead of a Champions Cup quarter-final defeat to Leinster: “Eddie [Jones] is really pleased with what Elliot brings.

“I wouldn’t be surprised if he is moved around a bit and Elliot will be comfortable with that for a season or so but at some point I’m sure he will want to nail a spot. I see him progressing to 15 or 13. Speaking to Elliot here, he feels 13 is his best position.”

It was a prescient observation as Daly switched to fullback with England; neither club nor country coach is content to let the 26-year-old settle into one role, albeit for slightly different reasons. The player’s form might have been undermined slightly by rumours that he will leave for Saracens in the summer.

Daly must be dizzy at this point with the perpetual positional merry-go-round: versatility can be overrated.