Davies and Williams back in the frame for Wales

Davies and Willams back in training after overcoming injuries 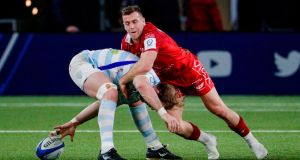 Scrum-half Gareth Davies and back Liam Williams had been hit by thigh and finger injuries respectively, but McBryde said on Monday that both players are in selection contention for Paris.

Number eight Ross Moriarty is also available and back in training following concussion, while Dan Biggar and Adam Beard are fit, but, as expected, Leigh Halfpenny, Scott Williams and Rhys Patchell are ruled out injured.

Wales have won their last nine Tests and victory over France would equal their longest unbeaten run since 1999.

“It is not as lengthy (a list of absentees) as last week,” Wales forwards specialist McBryde told reporters. “When we selected a larger than normal squad (39 players) it was to cover.

“It has been good to welcome quite a few faces back today.”