Kilkenny no match for St Michael’s 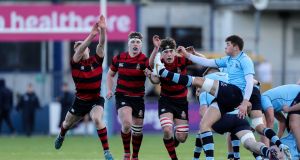 St Michael’s will take some stopping in the Leinster Schools Senior Cup after a super-smooth victory over Kilkenny at Donnybrook yesterday.

Michael’s willingness to play out wide was met with direct force from Kilkenny, for a knock-on, which turned into a penalty at the first scrum, outhalf Charlie Tector missing the target narrowly to the right.

The frontfoot defence of St Michael’s number eight Will Hickey was evident and Chris Cosgrave’s caressed kick was fielded by Mark O’Brien to set up prop Jack Boyle’s surge to within a metre.

Kilkenny defended stoutly to keep the ball off the floor before Michael’s used a five-metre scrum to generate quick ball for prop Boyle to drive over. Cosgrave added the conversion.

This was backed-up by Stephen Woods’ immaculate offload to flanker Jack Guinane with Cosgrave the link to wing Edward Kelly for a powerful finish, Cosgrave converting for 14-0 in the 12th minute.

The Marble City kids hit back with a venomous maul and a penalty from Tector for a high tackle. That maul was cranked up again for a gain of metres until it was trapped into a turnover.

The last thing they wanted to do was hand the ball over to a surgical St Michael’s, Cosgrave orchestrating a methodical attack that concluded with Boyle being held up over the line for the second time.

The resulting scrum was steady and scrumhalf Rob Gilsenan darted over the line, Cosgrave’s conversion making it 21-3 in the 24th minute.

There were then two fine moments from Kilkenny centre Andrew Ross with the ball and without it in a crunching tackle on Kelly.

The footwork of fullback Matthew Hodgins was also a useful tool to keep the defence guessing.

It wasn’t enough to make a breakthrough and Cosgrave struck a penalty for 24-3 at the break.

The trend continued with Boyle blowing away defenders for his second try, Andrew Smith following up for the fifth, both converted by Cosgrave.

Then, Kilkenny put the ball in the hands of their powerful wing Success Edogun for a superb try, converted by Tector in the 52nd minute.

Smith then strode to his second and replacement James Power was on the end of a swift move for their seventh touchdown, all converted by the immaculate Cosgrave.