‘Mentally, I wasn’t in a good enough place to go out there and take the opportunity’ 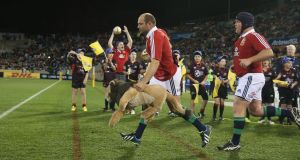 Rory Best leads out the Lions against the ACT Brumbies at Canberra Stadium in 2013. Photograph: David Rogers/Getty Images

Rory Best’s British & Irish Lions’ number is 793. His debut against Western Force in 2013 fulfilled a childhood ambition, captaining the Lions against the Brumbies in the third of four appearances on that tour provided a massive honour; yet delving beneath the superficial, the bare statement of facts uncovers a tale of disappointment and heartache for the most part.

The circumstances surrounding his selection when not chosen in the original squad - he was a late replacement for the suspended Dylan Hartley - and some of his experiences on pitches in Australia left him racked with self doubt and fundamentally compromised any chance of enjoying the experience.

Speaking at the launch of GSK’s Tackle Meningitis awareness campaign in St Mary’s College, the 34-year-old Ireland captain spoke with unflinching honesty about why he travels to New Zealand this summer determined to create positive memories in the iconic red jersey and a legacy of which he can be proud.

To fully appreciate how he felt watching last week’s Lions squad announcement on a family holiday in Donegal, it’s important to rewind four years. Ulster were training the day that the 2013 touring party was being unveiled, so Best was oblivious to unfolding events.

His wife, Jodie, was at home watching the announcements live. “She’d seen the hookers come up in alphabetical order; the first one up was Dylan (Hartley). She went, ‘oh no there must be a mistake.’ She had to live with all that. I didn’t have that particular image ingrained in my mind, I just had all the other bits and pieces around it.

“One of the big things with the Lions is to be named. I have played and got my Lions’ number but to not hear your name read out in that initial squad is (disappointing).

“Mentally it was really tough because everyone reports why you didn’t go. They pick your game to pieces, saying ‘it is because of this and that.’ You try to get away from it but there is no getting away from it and you start to believe it.

“After the disappointment of losing (a Pro12 final to Leinster), you’re thrust into the centre of it. You’re trying to forget about the disappointment, you can’t really get rid of it. Mentally, I wasn’t in a good enough place to go out there and take the opportunity that was given.

“That’s only in hindsight; at the time I felt ‘here we go, I’ll try and make the most out of this.’ For me, I didn’t play very well four years ago. You think that others think that you’re not good enough to be here.

“I have been a rugby fan all my life. I grew up watching the Lions, I didn’t make it originally and then you’re in (and you’re thinking) am I good enough to be here? It’s a very tough place to be.”

Best smiles as he tells another anecdote against himself. “I captained them to their only defeat outside of the tests, which is obviously not something I am proud of but I said afterwards that in years to come I captained the Lions. I’ll just not mention the score and of anyone asks, I’ll say I can’t really remember.”

A primary doubt was venturing into the unknown. Everyone assumes that a then 30-year-old player with over 60 caps with his country will take it in his stride. Many are too preoccupied with their own travails to be intuitive enough to notice any issues a teammate might be experiencing.

Best conceded: “When someone has played so many times for Ireland you’ll assume that he will pick it up and get on with it. It shows that no matter what stage you are at in your career that mental battle is a large part of it.”

He remembers being incredibly nervous ahead of his first cap and then laughs as he recalls being bombarded by random thoughts ahead of captaining the team against the Brumbies. “I remember thinking, where do I drop the Lion (mascot)? I have seen so many captains run out with it.

“It’s funny that silly things that come into your mind and all the smallest things just take your eye off your performance slightly. At this level a couple of per cent makes a big difference. It sounds stupid.”

Not in the context of a player slightly addled by the whole Lions’ overview. In 2009 when the Lions toured South Africa, Ireland were coming off a Grand Slam, and Best had come off the bench in most of the games.

He was touted as a potential tourist and especially when Jerry Flannery was ruled out through injury prior to departure but once again he was overlooked. As he remarked: “it’s the hope that kills you.”

So one could imagine the scene in Donegal last week as Best tried to follow the 2017 Lions announcement on an iPhone with a dodgy 3G signal seconds behind the live transmission.

He swiped away a text from his dad, declined a call from his mum, and started to feel a sense of dread that the only people that were trying to contact him were his parents; that is until a raft of text messages started to drop.

“To be sitting round with just the five of us (wife, Jodie, and children Ben, Penny and Richie) in the house was nice. When we got to Liam Williams at the end of the backs, my wife was nearly in tears, my son was saying he feels sick and I’m thinking what am I going to do if I am not in this squad.

“I have to console these two again. Thankfully I didn’t have to. For me it is about making sure that I show on the biggest stage that I can play at that level. This feels so much nicer now. My own personal experiences of the Lions have been so bad that it is nice to have a good one of something that is the pinnacle of your career.

“It is something that has driven me on to do better things in my rugby but at the same time I would like to get into the jersey and prove to myself that this is a level that I capable of playing at.”

No one would begrudge him that wish.