Six Nations talking points: Wales on the right side of history 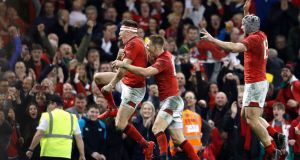 Momentum, momentum, momentum. As Ireland search for it, Wales have it, yet the margins are tiny. On opening night Wales were in almost as tricky a spot as Ireland were in Paris in round one a year ago, trailing the French 16-0.

They were somewhat gifted the ensuing win when the French effectively coughed up two soft tries, and Wales weren’t especially good in Rome either, but Warren Gatland had rotated his squad heavily and along with his coaches came up with a plan for the rumbling English chariot.

It was always likely that Wales’ defence would match England physically across the gain line and, facing a specialist fullback for the first time in three games, England also found less joy from their kicking game.

Again showing they are the best comeback side around, when Wales put England under pressure in the second-half for the first time in the tournament, the chariot stuttered.

It is the fourth time Wales have won their opening three games in the Six Nations. On the previous three occasions they have won the Grand Slam, thus underlining that no-one runs with momentum better than the Welsh. Gerry Thornley

France a clear and present danger for Ireland

Peter O’Mahony sparked a talking point on the pitch after Ireland’s latest performance laden in error. Italy are a “super”rugby team, said the Munster captain (not Ireland captain anymore as that task definitely goes back to Rory Best after Seán Cronin’s opportunity turned to dust) and, O’Mahony added, Conor O’Shea is doing an “incredible job.”

Shane Horgan and Shane Jennings are on television because they never minced words as players and presumably won’t as punters. Horgan refused to let the O’Mahony line slide, saying it’s “the worst Italian team I’ve seen in ages.” Jennings was equally fortnight when stating, in the context of O’Mahony’s comment, that “not to be disrespectful to Conor O’Shea but he’s not really doing a great job.” Proof being offered by the fact Italy have not won a Six Nations game on the Irish man’s watch.

Now, actually, Italian rugby is improving under O’Shea. That is clear from Treviso results in the Pro 14 and Sunday’s Tito Tebaldi-inspired scare they gave Ireland. What’s also evident is Ireland are dangerously off colour three games into a Six Nations campaign that seems more important than ever because 2019 ends with the World Cup.

There are still too many unknowns. They might not have a solution to the power game guaranteed by England and South Africa (the Springboks under Rassie Erasmus will definitely have their act together after announcing over the weekend that they’ve scrapped the 30 cap rule for players based in Europe and that “Regulation 9 will be rigorously enforced.”).

However, a far more pressing problem for Joe Schmidt is France. Twice during this tournament the French have looked like a very good team; the opening 40 minutes of round one against Wales and while beating Scotland on Saturday. Suddenly, it’s possible Ireland could finish this tournament with three defeats and two lousy winning performances.

Cardiff - where the all-conquering English myth dissolved - on Grand Slam day is the least of several growing concerns.

France revitalised by Dupont, Ramos and Ntamack are coming to Dublin. Their threat is real.

One bright spark from the weekend was Tadhg Beirne’s scrum-cap-less tour de force for Munster. He is needed. Others, not so much. Gavin Cummiskey

Sunday was the first time this Irish team ever played together in a competitive match. And it looked like it. Looking towards Japan, Joe Schmidt knows now more than ever before is that for Ireland to do well in the Rugby World Cup - or before that against France and Wales - he must have all of his frontline players healthy and in top form. Anything else will fall short.

Nobody quibbled with the individuals who lined out in Stadio Olimpico. But shortly after the game began Ireland looked like a team not stitched together at the seams. They were too easily disrupted, riddled the first half particularly with errors and looked like a group of individuals rather than a team.

It didn’t help that Bundee Aki left injured early in the first half or that Iain Henderson was forced into the game shortly after for a while. Ireland looked 15 per cent off their ‘A’ game from the time Johnny Sexton’s restart went long to Italy ripping them apart for their try on the stroke of half-time.

Players such as Garry Ringrose, James Ryan, CJ Stander, Cian Healy, Robbie Henshaw, Devin Toner, Dan Leavy, Rory Best need to be there and need to be playing at their extreme best or Ireland may lower their expectations to genuinely compete as the second ranked team in the world.

Joe Schmidt will chalk it down as a bonus point win. But in a World Cup year a performance like this against the weakest team in the competition probably isn’t enough. Johnny Watterson

Masks, loads of parking and no people: Covering GAA in a pandemic