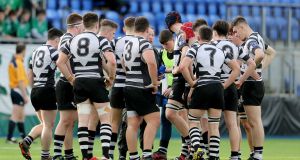 One of the students, having played representative age grade rugby while attending another school, was enrolled in Roscrea last September to repeat his Leaving Certificate.

The Leinster schools committee’s “20 month rule” was introduced to stymie leading rugby schools recruiting talent from other schools and the youths (club) system.

It states that a teenager has to be in the school before fifth year, unless there are “exceptional circumstances,” if he is to be eligible to play in the Leinster schools senior cup.

The edict came after the 2014 competition was won by a Blackrock side including Joey Carbery and Conor Oliver. Carbery – now an Ireland international – and Oliver, man of the match for Munster against Connacht last weekend, both entered the school in sixth year so, under the subsequently rewritten regulation 8.6, they would be ineligible.

This situation mirrors the professional game’s move from a three to five year residency rule which enabled Bundee Aki and CJ Stander, among others, to represent Ireland.

There are other examples, dating back decades, of players moving to schools like Terenure College, Clongowes Wood College and St Michael’s College, or students repeating their Leaving Certificate in leading rugby nurseries that act as main talent arteries into the Leinster Academy.

“The 20 month rule and with the ban on Leaving Certificate students participating in The Bank of Ireland Leinster Schools Senior Cup presents Cistercian College with grave difficulties,” stated Cistercian’s, who are represented by Andrew Cody of Reidy Stafford solicitors, “challenging the very core of its ethos and its commitment to pupils. As such, the college believes it has no remaining option but to take action to address this.

“The central principle for what is an unclear and flawed rule states that a boy joining a Leinster school must be in attendance at the school for 20 months before being eligible to play in the Leinster schools senior cup and its feeder competitions.

“In applying this rule, the Leinster Branch schools committee are of the view that they are not stopping anyone attending a particular school nor are they preventing anyone from playing rugby.”

Another representative age grade player moved from Roscrea to Newbrige College this season and was subsequently cleared to play on their senior cup team.

Cistercian College argue the decision made by parents to send their son to boarding school, due to “financial and other sacrifices” is not possible in many cases until the Leaving Cert cycle.

“Due to a number of factors often unrelated to sport, Cistercian College have many students who start in fifth year and as such, we believe that the school is uniquely affected by this rule, a key point that the Leinster Branch schools committee has never acknowledged.

“Over the last three years, eleven boys did not accept a place at Cistercian College as their reasonable individual request for exemption from this rule was denied. To arbitrarily deny any boy or girl the opportunity to represent themselves and their family at the highest level of schools sport is simply wrong regardless of the school involved.

“This academic year, the Leinster Schools committee have adjudicated on the fair and legitimate applications of nine Cistercian College students, young players and their families who have made real sacrifices and shown tremendous faith in committing their futures to the school despite the threat to the very future of Cistercian College less than 12 months ago. Each and every one have been rejected, despite due process, such as it is, being followed.

“Our concerns are not about trying to manufacture success in a schoolboy competition. It is about putting the hopes, aspirations and futures of the schoolboys involved first in allowing them the chance to compete.

“The legal representatives of Cistercian College has carried out a full review of the adoption and implementation of these rules and are satisfied that there are serious and fatal flaws contained which make the specific rules invalid and unenforceable.”

Cistercian have written to the IRFU and Leinster Branch asking them to “urgently and immediately to waive the requirements of the ’20 month rule’ and the ban on repeat Leaving Certificate students for the 2018 Leinster Schools senior cup.”

They state that if this matter is not “resolved amicably between relevant parties” by next Monday, January 15th, they will be “left with no alternative but to bring proceedings before the High Court challenging the regulations, processes and decisions so as to ensure the nine boys are available for selection.”

In response, the Leinster Branch said, “that until time as the issue is resolved, we will not be in a position to make any comment.”

Steps towards a resolution between the Leinster Branch and Cistercian College have been initiated.