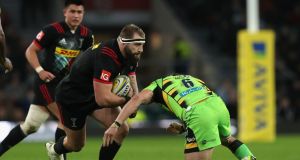 Joe Marler has been ruled out of England’s first two Six Nations matches against Italy and Wales after receiving a six-week suspension, handing Eddie Jones a considerable selection headache for the start of the championship.

The Harlequins prop’s second suspension of the season comes after he was shown a red card for striking the head of Sale’s TJ Ioane with his shoulder last Saturday and he will be unavailable for England’s opener in Rome on February 4th as well as the visit of Wales six days later. With Ellis Genge (shoulder) and Matt Mullan (ribs) sidelined, Mako Vunipola is the only fit loosehead prop at Jones’s disposal with Test experience. Beno Obano is seemingly in line for his England debut off the bench.

Marler is free to play again on February 20th, meaning he would be available to face Scotland at Murrayfield four days later but it remains to be seen if Jones will select him considering the length of time the 27-year-old will spend on the sidelines. He also misses the last two pool matches of Quins miserable Champions Cup campaign, starting at home to Wasps on Saturday.

Marler pleaded guilty at a disciplinary hearingon Tuesday night but after the independent panel ruled he had made contact Ioane’s head, the minimum sanction was a six-week ban. An additional week was initially added owing to Marler’s record – he was also given a three-week ban in October – but due to mitigating factors, including his plea and his conduct since Saturday, the ban was reduced by a week.

The absence of Marler is likely to count in the favour of Obano, the Bath prop, who was called up by England for the first time last week after impressing with a series of eye-catching performances, including the European double header against Toulon – the second of which was attended by Jones. The 23-year-old made his first league start for Bath only this season and when asked about Obano last week, Jones said: “Potentially he’s going to be a good player but he’s got a hell of a lot of physical work to do.” After attending England’s two-day camp in Brighton, Obano, the cousin of Maro Itoje, said: “I still don’t think I’m that close to playing for England if I’m honest. There is still a lot of hard work to do.”

Marler’s previous ban was for striking Wasps’s Will Rowlands and it ruled the Harlequins prop out of England’s opening autumn international against Argentina in November. He was then immediately recalled by Jones for the Tests against Australia and Samoa, while he was also fundamental to England’s Six Nations success last year, starting all five matches.

Marler’s latest suspension is all the more frustrating considering it was most likely an act of retaliation after Ioane was also banned for two weeks for striking Marler in separate incident five minutes earlier.

In September Marler was given a citing commissioner’s warning for his part in an unseemly spat with James Haskell. He was also banned for two weeks and fined £20,000 for calling Wales’s Samson Lee “Gypsy boy” during a 2016 Six Nations match and less than a month later he received a two-week ban for kicking the Grenoble hooker Arnaud Héguy in the head.

1 Waterford turn Kilkenny upside down and inside out
2 Waterford’s frenzied waves of attacks too much for Kilkenny
3 Klopp furious as injuries mount and VAR decisions prove costly
4 Ireland’s work-ons: Four things Andy Farrell needs to address
5 David Humphreys: Georgia simply can't be dropped in at the deep end
Real news has value SUBSCRIBE