Robin Copeland heading for France as he confirms Connacht departure 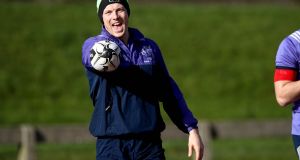 Robin Copeland has confirmed he is leaving Connacht to join the French ProD2 club Soyaux Angoulême XV Charente on a three-year deal.

This looks like being the final staging post for the strong-running number eight from Wexford, whose career started in the Leinster academy and took in Plymouth Albion, Rotherham Titans, Cardiff Blues and Munster before joining Connacht two seasons ago.

Announcing his move on his Twitter feed, Copeland said: “One adventure ends and another begins. Loved my time in Galway with Connacht rugby but sadly my time there has come to an end, some great memories and fantastic people!

“From the moment I arrived in the gates it felt like home, and the atmosphere which the coaches, staff and players create is one of the best of being a part of. I genuinely loved going to work every day even when things didn’t go to plan which, of course, in sport they rarely do.”

Wishing Andy Friend and the squad his best for next season “and hope they go on to do great things”, Copeland added: “For me my next step is a place I have always wanted to play, France. The opportunity to go and explore French rugby and French culture is one I cannot pass up.”

Located in the Nouvelle-Aquitaine region and inland from Bordeaux, Copeland’s new team play their home games in the 8,000 capacity Stade Chanzy in Angoulême, a city with a population of 40,000.

The club is a product of a merger between Sporting Club d’Angoulême Rugby and Rugby Club Soyaux in 2010, and won three promotions from Fédérale 3 inside seven seasons to spend the last four years in ProD2. They were placed seventh, just four points behind Biarritz and the last of the playoff places when the season was abandoned due to the coronavirus pandemic.

Copeland won one cap in the 49-7 win over Georgia at the Aviva Stadium in November 2014, when appearing off the bench for the last quarter and winning the turnover which led to the pick of Ireland’s tries on the day.

Injuries have plagued Copeland’s career, especially in latter seasons with Munster and Connacht, and considering he was restricted to just 18 appearances (including 11 starts) over his two seasons with the western province, a three-year deal makes good sense for a 32-year-old.

His one try for Connacht was a memorable one, completing that remarkable match-winning comeback against Gloucester in the Heineken Champions Cup at the Sportsground last December.

News of Copeland’s departure comes in the wake of Connacht confirming the signings of centre Sammy Arnold and flanker Conor Oliver from Munster, as well as the Leinster academy products, prop Jack Aungier and lock Oisín Dowling.