Will the Champions Cup retain its old magic without supporters? 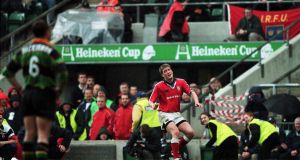 Would Ronan O’Gara kicked Munster to victory in 2000 if the game was played behind closed doors? Photograph: Inpho

This should have been one of the grand weekends of the rugby year. The Champions Cup final was due to be staged in Marseille on Saturday and a quick check of the weather forecast is a reminder of just how grievously it will be missed. Unless, that is, you don’t much care for clear blue skies, temperatures of 25C and a glass of something chilled overlooking the Vieux Port.

With party-loving fans from right across Europe all gathering beside the Mediterranean it had the potential to make the Monaco Grand Prix feel like a garden fete. As in Newcastle 12 months ago, it would also have offered a tantalising glimpse of what rugby might become if it were ever consistently smart and united enough. Instead we will just have to make do with sitting at home, staring at the now-familiar kitchen wall and speaking French to the cat.

It is a double shame because this year’s knockout stages promised so much. It may yet be, of course, that the matches are finally played this autumn and Marseille hosts the finals, after all, in mid October. But hang on. What if no spectators can enter the stadiums, there is no riotous colour or atmosphere and no late-night revelry in tightly packed bars? Does that qualify as proper rugby at all?

We know the stock answer: any rugby is better than none. Which it probably is, up to a point. Fulfilling routine league fixtures will at least make sure the television money gets paid and satisfy the competitive itch to some degree. But pause for a moment and think about the biggest showpiece games: how will it feel to watch a team lifting Europe’s most sought-after club trophy in an echoing, empty ground, unable to spray champagne because of health and safety concerns, no family or friends to hug afterwards? Surreal does not even begin to cover it.

Not much discussed in rugby yet, either, is the competitive difference that playing behind closed doors could make. Look at the four Champions Cup quarter-finals: Leinster v Saracens, Clermont Auvergne v Racing 92, Exeter v Northampton and Toulouse v Ulster. Instead of being lobbed into their respective bearpits and assailed from all sides by waves of partisan noise, the four visiting sides will be able to hear a pin drop. It will quietly alter the equation, if nothing else.

As Saracens have shown over the years, it is not an absolute requirement to have tens of thousands of fans in attendance to win trophies. Their ability to block out everything and thrive on neutral grounds – Lyon in 2016, Murrayfield in 2017 and Newcastle last year all spring to mind – was remarkable. The mind’s eye also drifts back to 2014 when they took apart Clermont 46-6 at a two-thirds unoccupied Twickenham; the rows of empty seats barely seemed to register.

Conversely, however, what about their rescheduled snowy game against Clermont at Allianz Park in 2017-18 in front of two men and a dog? They lost 46-14 and were pretty fortunate to come second. It suggests the exact location or limited crowd numbers count for slightly less than a team’s state of mind. If a side aren’t mentally right before they run out, it will matter not how many are watching.

Still, it is fun to look back and wonder if a lack of a crowd might have changed the outcome of any big European games in the past. Take the first final of the millennium, which also happened to be the first played on English soil. Northampton were facing an entire Red Army of mad-keen Munster supporters who had flown over to London en masse from Shannon and Cork, desperate for their team to be crowned European champions.

The semi-final win over Toulouse on a roasting hot afternoon in Bordeaux had been one of the great occasions and, from that Twickenham day to this, I have never seen quite so many visiting fans milling around outside the stadium so far before kick-off. Maybe that sense of delicious expectancy infiltrated the Munster dressing room; as Ronan O’Gara said years later in his autobiography, the occasion got to him.

The young Irish outhalf missed four penalty attempts out of four, including a late one that allowed the Saints to edge home 9-8. “At the final whistle I stood in the middle of the pitch, surrounded by 70,000 people, completely alone,” wrote O’Gara. “That experience probably made a man out of me.”

But what if no one had been in the ground? O’Gara would still have had to deal with the pressure of the moment – like poor old Doug Sanders on the final hole of the Open at St Andrews 50 summers ago – but not the gasps and frustrated sighs that increasingly swirled around Twickenham as the ball consistently refused to bisect the distant uprights. With the Munster of that era there was an unusually close relationship between the team and their supporters; mostly it helped to win games they might otherwise have lost but here was an exception that proved the rule. Everyone present wanted it so badly that, ultimately, the intensity of that desire became counter-productive.

It is too late to rewind now but we do know this: empty grounds are set to become an all-too-familiar part of the rugby landscape. Maybe, ironically, it will help Irish goal-kickers, for whom a theatrical hush is a more natural state of affairs, more than their French counterparts. Might Ulster, if and when they play in Toulouse, also find the lack of Gallic whistling and roaring to their advantage?

Here’s hoping, either way, that the sound of silence does not blank out everything that makes big-time rugby so special. - Guardian

1 Keith Duggan: Bubba Wallace tweet shows just how troubled Donald Trump’s mind is
2 Mark Lawrenson: Searing honesty and a sense of being in control defined Jack Charlton
3 Malachy Clerkin: Sleep well Jack, you made us all happy
4 Ken Early: Another Mourinho masterclass in going through the motions
5 Peter Byrne: A gruff exterior hid the sensitive soul and warmth of Jack Charlton
Real news has value SUBSCRIBE