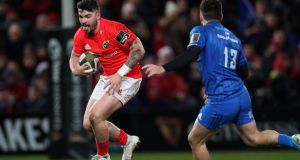 Connacht have announced the signings of four new players, including the acquisition of Ireland international centre Sammy Arnold from Munster.

Arnold will be joined at the Sportsground by Munster teammate Conor Oliver, alongside Leinster duo Jack Aungier and Oisin Dowling.

24-year-old Arnold has also previously played for Ulster, and he picked up his solitary international cap in November 2018, coming off the bench during Ireland’s 57-14 win over the USA in Dublin.

Oliver meanwhile made28 appearances for Munster having graduated from the academy, and he can offer Connacht boss Andy Friend options across the backrow.

Meanwhile 21-year-old prop Aungier made his Leinster debut last November, and he will be joined in the west by looming six foot five secondrow Dowling.

The quartet will all be Connacht players from July 1st, with Arnold, Aungier and Dowling all signing two-year deals.

On his side’s new arrivals, Friend said: “In Sammy, Conor, Oisin and Jack we have secured the signings of four very talented and promising young Irish rugby players.

“They each have unique skillsets which will enhance our squad for next season and beyond, and will allow us to continue to grow as a program. We’re all looking forward to welcoming them to The Sportsground and integrating them into our playing squad.”

Munster meanwhile have announced the signing of 22-year-old prop Roman Salanoa from Leinster on a two-year deal.

The province also confirmed the departure of Arno Botha, who is returning to his native South Africa to join the Blue Bulls. Botha spent two seasons in Limerick.