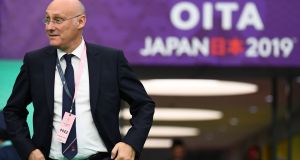 There has been a lukewarm reception within the game to the rather fanciful concept of a World Club Cup which has been floated by the French Federation president Bernard Laporte and would, he suggested replace the Heineken Champions Cup.

In response, the latter’s organisers, EPCR, delivered a shot across Laporte’s bows in revealing their stakeholders had been exploring a world club competition every four years to complement their European competitions.

Although Laporte is an ambitious, high-achieving heavyweight player in rugby’s global politics - witness him delivering the 2023 World Cup to France - his radical proposal for a World Club Cup has to be viewed in the context of his imminent bid to become to become the vice-chairman of World Rugby.

Laporte is running alongside the current chairman Bill Beaumont, who wants to extend his tenure, to replace Agustin Pichot as vice-chairman, and as things stand they are set to be unopposed.

Deadlines for nominations are at the end of the month, with elections due to take place on May 13th, and it remains to be seen if Pichot, who is reputed to be focusing his energies on a 2027 World Cup in Argentina, will again stand for vice-chairman.

In an interview Laporte has given to the twice-weekly French rugby magazine Midi Olimpique, the French Federation president has said he will put his proposal for an annual World Club Cup featuring 20 teams to leading unions this week.

It would involve four pools of five teams, made up of four each from the Guinness Pro14, Top 14 and Premiership, along with six from Super Rugby and one each from the USA and Japan. The tournament would take place over six weeks - there years out of four barring World Cup years - and would be introduced at the expense of the Heineken Champions Cup. The broadcasting and sponsorship deals for the Champions Cup run until the end of the 2021/22 season, so not before then anyway.

The concept ensures maximum attention for Laporte in the game’s current vacuum and portrays him as a visionary capable of increasing rugby’s revenue streams while also working towards a global calendar in advance of the elections.

“This crisis must push us to be innovative. Let’s make this new competition. I am sure that the public, partners and televisions will follow,” Laporte told Midi Olimpique.

However, in a statement EPCR confirmed that “discussions have already taken place on an official level between EPCR and its shareholders regarding a global club tournament which could complement the Heineken Champions Cup and Challenge Cup and which could take place once every four years.”

The statement added: “EPCR does not believe it appropriate to highlight such discussions while the public health crisis due to COVID-19 continues, and currently, the organisation’s focus is on attempting to reschedule the knockout stages of the 2019/20 tournaments subject to government and local authority directives.”

Furthermore, the Premiership and Top 14 club owners would be loathe to concede any control of a competition involving them to World Rugby. While presumably revenue streams would filter down to all those on the outside looking in, Laporte’s concept would leave ten teams each from the Pro14 and Top 14 idle for six weeks, along with eight clubs from the Premiership and another eight from Super Rugby. Meanwhile, USA Rugby is bankrupt and the Sunwolves from Japan have been jettisoned from Super Rugby.

Aside from looking like a square peg in a round hole, such a tournament could well have serious issues in terms of player welfare given the additional travel unless the tournament were to be run off over a month and a half in, say, Dubai.

Nor might it be anything like as attractive as imagined. Were a line to be drawn through the rest of this season - which, of course, is entirely plausible - the competition would have no Clermont or Toulouse and, unless countries were ring-fenced, no teams from Wales, Australia and Argentina. Were it ring-fenced, it wouldn’t be remotely meritocratic.

For example, this proposal could see the Seattle Seawolves playing Edinburgh, or the Bristol Bears versus the Sunwolves, or, confusingly, the Sharks against the Sale Sharks, and the Chiefs against the Exeter Chiefs.