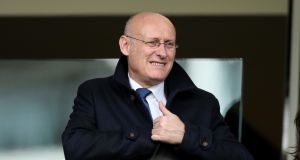 Bernard Laport has put forward the radical new idea of a rugby Club World Cup which would see the end of the Champions Cup. Photo: David Rogers/Getty Images

A radical proposal for an annual Club World Cup featuring 20 teams from around the globe will be put to leading unions this week as part of an effort to boost rugby’s finances. The competition, proposed by the French federation president, Bernard Laporte, could mean the end of the European Champions Cup in order to create space in the already cluttered calendar.

Laporte, who is vying to be World Rugby’s vice-chairman next month, has been formulating the plan alongside the governing body’s chairman, Bill Beaumont, since the World Cup last year.

The Club World Cup, part of their manifesto before the World Rugby elections next month, would involve four pools of five teams, made up of four from the Premiership, the Pro14 and the Top14, six from Super Rugby and one each from the USA and Japan. The tournament would take place over six weeks – every year except for World Cup years – and would be introduced at the expense of the Champions Cup, which Laporte believes does not make enough money.

Laporte revealed he has discussed the idea with the Rugby Football Union chief executive, Bill Sweeney, who is described as “excited by the project”, as administrators around the world look to deal with the huge financial impact of the coronavirus pandemic. Laporte told the French newspaper Midi Olympique: “This crisis must push us to be innovative. Let’s make this new competition, I am sure that the public, partners and televisions will follow.

“Faced with today’s threats, we must move the lines, multiply aid and imagine what will be the rugby of tomorrow. This is why, for several weeks, I have been working with Bill Beaumont on the restructuring of the international calendar in order to standardise the windows reserved for national teams. And, in fact, create a new window dedicated to clubs, which would allow the creation of a new international competition: the Club World Cup. This will be included in our manifesto which will be sent this week to all the federations.”

The idea has received a mixed reception from within the Premiership. There is a sense that the competition should be run by the clubs, rather than World Rugby, that it should take place every four years and that it should not spell the end for the Champions Cup. There is, however, support for a Club World Cup in theory with rugby’s finances taking such a heavy hit.

“This project is a club competition, not an international tournament and must therefore be piloted by the clubs; it should not be placed under the aegis of World Rugby,” said the Bath owner, Bruce Craig. “We are talking about a Club World Cup project that would have linked the best entities on the planet every four years. A kind of World Champions Cup which would therefore not encroach on the European Cup as it exists today.

“A Club World Cup would allow an immediate redesign of the international calendar, a reform that would clearly separate club rugby from the international game and thus avoid players playing 30 games per season, as is the case today. But whatever happens in the coming months, club rugby must remain managed by the clubs, it is non-negotiable.” – Guardian