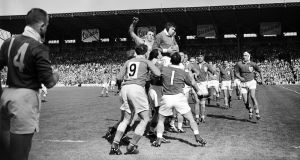 France beat Wales 11-3 at the Colombes stadium in 1959 to win the Five Nations. Photo: AFP via Getty Images

Sixty years ago, two writers decided on a book explaining the history and unique features of French rugby before the national side’s tour to New Zealand the following year. The upshot was The Rise of French Rugby, written in English by Alex Potter and Georges Duthen and published in Auckland.

It is a time for spring cleaning and dusting volumes that have been deprived of light for too long but this book has remained close to hand. Written in a style all of its own, as if translated too literally and enthusiastically, it had an early hook: “Chase the natural away and it comes galloping back.”

The authors were reflecting on a debate that, then as now, divided rugby followers in France: style of play. When France toured South Africa in 1958, the year before they won the Five Nations for the first time, they were feted there for what one writer called “champagne rugby”. The blue glass overflowed, effervesced by running, handling and passing the locals were not used to.

Potter and Duthen reflected it had not been so long ago the game in France had been condemned as “trench rugby”, defensive and unambitious. Philippe Struxiano, a scrum-half who captained Les Bleus in the 1920s, once said he wanted eight mules at in the pack rather than gambolling forwards and neither the fact France became the first team to win a series in South Africa since 1896 nor the style with which they achieved the feat convinced everyone he was wrong.

“Our forwards are too much like acrobats and conjurors,” was one opinion. “In their eagerness to caper they forget their first role is to win the ball.” And another: “Eight brilliant individuals do not make a pack. We must get back to fundamentals and insist forwards sink their personalities and submit to collective discipline.”

The “what is natural?” debate has persisted, although in the 2010s it was hard to figure out what France stood for. “Much of the Frenchmen’s rugby in recent years has been more instinctive, more spontaneous and more inspired than that of their opponents in the British Isles,” wrote Potter and Duthen, “which in general has been more classical, methodical and scientific. The Frenchmen’s Latin temperament evidently has something to do with this.”

It was a temperament Bernard Laporte tried to stifle when he was the coach for eight years from the end of 1999 and tried to make Les Bleus whiter than England. Discipline was his keyword, in charge of players who struggled to stick to a script and were reluctant to shrug off the disciplinary code of the amateur era when players tended to sort out differences themselves, unfettered by laws, referees or citing officers.

Pugilistics, as Potter and Duthen, in Arsène Wenger fashion, refer to foul play. Forty years earlier, France’s then chief selector, Adolphe Jauréguy, a Basque, had warned against trying to ape England or any of the other home unions. “It would be wrong to damp our players’ temperaments with streams of technical hints and imperative commands,” he said. “Rugby’s crowning factor is speed. Play is so much faster than it was 30 years ago and it will get even faster. We must have forwards with the speed of three-quarters.”

As in Wales, rugby in France has been more popular in the south than in the north. “Seventy per cent of the fans are in the south, where most of the wine grows,” noted Potter and Duthen. “Why the game throbs and thrills in France’s most radiant region yet just ticks along, or doesn’t tick at all, in other areas is a mystery. You wonder if southern dyed-in-the-wool enthusiasts have heard of other sports.”

France resembled their old selves in this year’s Six Nations, even in defeat at Murrayfield when the prop Mohamed Haouas, an old-school forward who once decked his Montpellier team-mate Bismarck du Plessis before a match kicked off, acted as policeman after a scuffle broke out and was sent off for the excessive zeal he displayed.

The flair of Antoine Dupont and Romain Ntamack and the foraging ability of the back three was tempered by the defensive organisation of Shaun Edwards but France had an identity they had been missing for so long. It may be that, if the Six Nations is played to its conclusion, they miss out on the title to England but Fabien Galthié is looking for the side to peak at the 2023 World Cup, which France is hosting.

Laporte was in charge of the side when the World Cup was last in France 13 years ago, fixated as ever with England. For the second successive tournament, they were eliminated by their rivals at the semi-final stage. What followed was a slow descent to madness, although there were fleeting moments of clarity that offered a reminder of what should be.

The home unions long regarded France as an outlier after the Four Nations became five in 1910. After 21 years, they were thrown out, an episode chronicled in the book, and reinstated after the end of the second world war. The FFR was accused of not being in control of its game: 10 clubs had broken away and there were allegations of professionalism.

“In 1920, France had 173 clubs: in 1930, there were 784,” Potter and Duthen wrote. “The mass of fans loved international games; for the club championship, they had a passion. Local rivalries were white hot. Nothing was barred. Brutal play grew. Brawls and worse broke out everywhere. Fans invaded grounds. Referees were jostled and ‘if necessary’ beaten. If a team was reckless enough to win away from home, so much the worse for it. Shamateurism spread like the plague.”

The French were always different, something Galthié appears to be trading on. Vive la différence. – Guardian