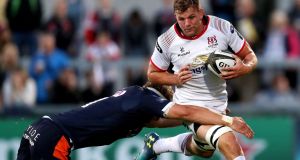 With back-to-back games to come in South Africa, and only a five-day window between Sunday’s game with the Isuzu Southern Kings and the trip to the Cheetahs, Ulster hardly needed to be losing players before departing today and, in particular, to already be planning without Jordi Murphy.

The former Leinster flanker only made his Ulster debut in last Friday’s dramatic 30-29 victory over Edinburgh but an ankle ligament issue has ruled the Ireland international out of the Kings game and possibly the whole trip which also involves taking on the Cheetahs at altitude in Bloemfontein.

Though unclear as to how long Murphy might be sidelined, head coach Dan McFarland stated that the nature of the injury is not considered to be long term which might yet open the door should he be required to fly out.

“It’s a loss not having Jordi there but we have other good backrowers,” McFarland said.

Indeed fit-again Springbok Jean Deysel should see his first game time of the season as Ulster go in search of three wins from three in Port Elizabeth on Sunday.

Ulster are taking 30 players south of the equator though experienced flanker Chris Henry is also staying behind in Belfast in the wake of the calf strain he sustained for Ulster A in the Celtic Cup game against their Leinster counterparts.

Also missing out is former Leinster prop Marty Moore – whose calf issue means he has yet to make his competitive debut since joining for this season from Wasps – as well as locks Peter Browne and Alex Thompson and utility back Jack Owens.

On a more positive note, as well as Deysel being fit, promising prop Tom O’Toole is good to go after missing out on the Edinburgh game. Both flanker Clive Ross and prop Tommy O’Hagan are also set to make the long-haul flight after recovering from their issues.

“The Cheetahs will be a tough prospect at home and the Kings, I admire the way they play as it’s full of endeavour and aggression and they are a very competitive side,” said McFarland.

“Their results don’t tell the story of the fear coaches would have when playing against them,” he added, though he was not with the province as they just about beat the Kings last season when Ulster played their only previous game in South Africa.