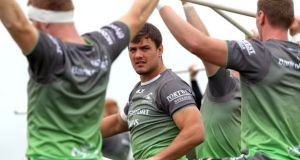 Quinn Roux has been promoted to the secondrow for Connacht’s encounter with Zebre. Photograph: Bryan Keane/Inpho

Handed a second home game in a row, the pressure on Connacht to record a win has been heightened by last week’s 27-26 defeat here to Glasgow.

A failure to take their chances, some soft defending and poor game management in the final quarter was compounded by Ian Davies and his TMO Olly Hodges not noticing that Stuart Hogg had carried the ball into his own in-goal area before grounding the ball and then Craig Ronaldson hitting the post with the game’s final kick.

Home team and crowd alike also have every reason to be wary of Zebre after Michael Bradley guided the Italians to last season’s double over the province he coached from 2003 to 2010.

Indeed, while Connacht may hold a 13-3 lead in the competitive head-to-head record, the Italians have won the last three meetings, and after last week’s bonus-point win against the Kings, they arrive in Galway on a run of four successive wins in the Pro14 – their longest winning sequence ever.

Connacht have been boosted by the return of lock Gavin Thornbury, who partook in the pre-season Irish training camp, and flanker Sean O’Brien. Quinn Roux is also promoted to the secondrow while Academy backrower Paul Boyle shifts to number eight for his second start.

Eoin Griffin comes in to an otherwise unchanged back-line, which certainly looks to have more tries in them, while new signing Colby Fainga’a and Kieran Marmion strengthen Andy Friend’s options off the bench.

Sadly, Parma’s brilliant young fullback Matteo Minozzi suffered an anterior cruciate ligament injury in his right knee last week and will now be sidelined for much of the season.