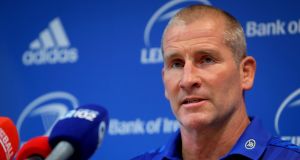 Stuart Lancaster: “I go hard on them, because I think it’s about winning,”. Photograph: Oisín Keniry/Inpho

There should be an edge to Leinster’s first appearance of the season at the RDS this Saturday when the Dragons come calling (kick-off 5.15pm).

The anticipated return of captain Johnny Sexton, along with Rob Kearney, Garry Ringrose, Josh van der Flier and James Ryan, would normally be enough to achieve that on its own.

On top of which though, there has been what Stuart Lancaster describes with a knowing grin as an “honest” review of the Pro14 champions’ performance in losing away to the Scarlets last Saturday.

The perception in England and France may be that there is a greater demand on their clubs to win every week, but that’s not the way Leinster or Lancaster see it, and early-season rust is no excuse.

“I go hard on them, because I think it’s about winning,” says Lancaster.

“Having gone through the pain of losing, and not just the two semi-finals at Leinster, but being an international coach, you still learn that the pain of losing is not worth it really. Our mindset should be to go out and try and win every game.”

“The reality is we’ve got players who are coming back in from international duty, we’ve got Europe coming around the corner and trophies are won at the end of the season. But you need to be in a position to win the trophies, so in a conference system you need to win your conference or come second. And what counts really is not just winning all your games, but particularly against the teams that are in your conference. So Scarlets for me, away from home, if we could have won that game with them being in our conference would have been a big win.”

Now Leinster have the Dragons, Edinburgh, Connacht and Munster, with all bar Connacht at home, and Lancaster has targeted four wins out of four in the run-up to their opening Heineken European Cup games at home to Wasps and away to Toulouse.

“We’ve four games now in the lead up to Europe where we need to win.”

“I was frustrated that we lost the game,” says Lancaster of last Saturday’s 23-21 defeat. “Scarlets are a quality team, and you don’t get many chances to go down there and win. I thought we put ourselves in a position at half-time, 14-10 up, to kick on from there. The next 13 points went their way, two penalties by Halfpenny and then obviously the knock-on turnover try.”

The 13-8 penalty count by Scottish referee Mike Adamson in favour of the home side angered many Leinster supporters. This was particularly so given some of the blatant penalties conceded by the Scarlets and the haste with which Adamson penalised Jordan Larmour for holding on and awarding Leigh Halfpenny the fateful last penalty of the game. But in this Lancaster and Leinster accept they were largely authors of their own problems.

“I think we allowed them out of their 22 too easily with penalties we could have avoided, there’s no doubt,” he adds.

“So that was part of the story from the review this morning, but also just making sure that when we need to take the game up a gear we can do that. I felt in the second half we only did that when we fell behind. Obviously we want to have an intent to play from the start. So yeah, it was disappointing to lose and the boys are a bit down on themselves this morning, and we had an honest review.”

After missing 23 tackles when trading four tries apiece in their opening win away to Cardiff, Leinster missed another 19 tackles in scoring three tries to two at Par ay Scarlets, and Lancaster felt there was a distinct improvement from opening night to game two.

a“I thought the defence was poor against Cardiff. I thought we were better last Saturday. I put the Scarlets up as probably the best attacking team we played last season, alongside Exeter and Saracens, and I thought we were much better.

“We struggled when Josh Murphy went in the bin, they caught us then, and obviously it was disappointing in the first five minutes that having talked about their intent to play out wide that beat us on the edge, but overall I thought we were improved, and there was more width in our defensive line which is where we came unstuck against Cardiff.”

Lancaster regards Leinster’s attack as good “in spells” against Cardiff, and pointing out that the Scarlets defended with flanker James Davis in their buckling, adds: “While it’s nice to play attacking rugby to the edges all the time, sometimes if you’ve got seven players you’re going to drive it, which is what we did. So I think, using our brains to create different ways to score, I thought we did well.”

“I thought that we lacked a little bit of cohesion on occasions, and I think that sometimes can be at this time of year when you are reintegrating players into the squad and changing the team.

“You look at Scarlets and Cardiff in particular, they can pretty much roll out the same team over the last three or four weeks whereas we, because of the number of players that have been on international duty who are quite rightly – I’am not disagreeing with the system – slowly being reintroduced, it makes cohesion sometimes a little bit more challenging at this time of the year in attack.”

With that in mind, barring the injured duo of Dan Leavy and Seán O’Brief, their aforementioned last batch of returning internationals should all make their seasonal reappearances at the RDS on Saturday. An exception is Jack McGrath, who sustained a knee injury in training last week, and is thus likely to have his return put back until the trek to Connacht in three weeks or Munster at the Aviva Stadium on October 6ah.

“It is a shame for Jack because he obviously worked really hard to get into the Ireland team at the end of the tour and he’s worked hard on his fitness and his change-up that we’ve been talking about, so it’s only a couple of weeks, but yeah it has just been frustrating for him really.

“But I think when you look at who is in our red box of injured players we’re actually not in bad shape at the moment and the good thing is that we can bring some pretty good players back in the equation this weekend.”