Connacht revel in ‘bonus points Sunday’ after seeing off Zebre 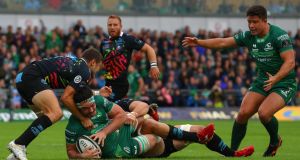 Connacht’s Paul Boyle scores a try during their Pro14 win over Zebre at the Sportsground. Photo: Tommy Dickson/Inpho

With renewed spring in their step, Connacht prepare to march on Edinburgh this week, having collected a first bonus-point win in this season’s Guinness Pro14 Championship.

Connacht’s man of the match against Saturday’s visitors Zebre, number eight Paul Boyle – in just his third appearance for the province – produced two first-half tries to set Andy Friend’s side on the recovery road after a disappointing campaign-opening loss to Glasgow.

It was the win Connacht needed – the ramifications of a second successive defeat at home all to clear, having spurned their chances the previous week, admitted Friend.

“We call it bonus points Sunday – it makes it a lot easier on Sunday to wake up with a victory – our wives definitely find it easier, and Connacht fans will find it easier that we got the win, so really important.

“We probably fell into a bit of a trap against Glasgow. We didn’t spend a lot of time on Glasgow, but maybe a bit more than any of the pre-season games, so this week we peeled it back with Zebre and focussed more on us. It’s a good lesson for us as coaches, you can be worried too much about the opposition and take your eye off your own team.”

Fashioned by a spirited forward pack, and a tenacious and well organised defence, Connacht held a stranglehold on the game with a 17-3 half-time lead.

“Defensively much, much better. We were found napping sometimes last week, and I have to take responsibility for that. We talked about tempo, but we didn’t address the defensive side of it, so we had a massive emphasis on defence this week and we shut them out in that first 20 minutes. They wanted to attack, and there were not allowed, and that laid the platform for us.”

Connacht took control from the kick-off, posted an early penalty, and by the eighth minute had capitalised on a Zebre knock-on when scrumhalf Caolan Blade’s break set up the supporting Boyle who barged through two tackles for his first try.

On 20 minutes the former Ireland under-20 captain second struck again after a Jarrad Butler lineout take and drivefor a 17-0 lead, and Michael Bradley’s Zebre, who won home and away last season, could only post a penalty from Italian outhalf Carlo Canno in the 24th minute.

It did not get any better for the Parma outfit after the break when they were reduced to 13 players for indiscipline, and Connacht capitalised swiftly, Blade diving over after an attacking five-metre scrum.

Outhalf Jack Carty continued to produce some probing kicks, and his low grubber enabled centre Eoin Griffin to secure the fourth try and bonus point after 59 minutes – the pack once again setting up the platform with a dominant scrum. Although replacement hooker Shane Delahunt was denied a 65th try for obstruction, his earlier breakdown rip epitomised a demoralised Italian side who were restricted to a solitary penalty and a 78th minute try. And once again Boyle was in the right place to send replacement Niyi Adeolokun in for the fifth, after another solid forward drive.

“All pre-season the set piece has been strong, but to see it function and out-perform a very good Zebre pack, was really pleasing, so hats off to our tight five,” said Friend.

“As a captain he is doing everything he is meant to be doing, and great person for Paul Boyle to follow.”

The 20-year-old Wexford-born Boyle, promoted from the Connacht Academy, caught Friend’s eye on day one.

“In his first performance in pre season, I said ‘who the hell is this bloke’, and the message to the whole squad is that age is not a barrier, and Paul is testament to that. He has continued to deliver, and when you watch his game, he carries hard, tackles, hard, knows his role, bounces off the ground quick – it’s a simple formula and he’s doing it really well and definitely deserved that man of the match accolade.”

With Robin Copeland, Bundee Aki (due back this week), Tom Farrell (sick), Ultan Dillane and Tom McCartney – who captained the Eagles last week – Friend says Connacht are in a good place.

“If we could, we might have stuck with a similar team, but injury and performance probably forced our hand a little. It is important for the players to understand, perform poorly, and you ain’t staying there, and the blokes underneath get the reward.”