Ulster miss bonus chance as performance slips away in second half 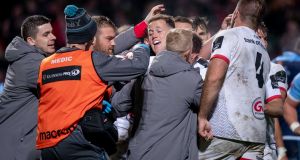 Ulster captain Billy Burns is mobbed by his team-mates after scoring a try in the Guinness Pro 14 game against Cardiff Blues at the Kingspan Stadium in Belfast. Photograph: Morgan Treacy/Inpho

Ulster made it three wins from four in the Pro 14, though this was a struggle to get there in a second-half performance which fell way short of what was desired.

The home side led 17-0 at the break after tries from Luke Marshall, who was sin-binned at the end of the half, and skipper Billy Burns. But they failed to cross Cardiff’s line again as the visitors came back with touchdowns from Aled Summerhill and Will Boyde in a scrappy second half.

Moments after centre James Hume was carted off with a leg injury, Ulster struck off a Cardiff scrum with Sean Reidy charging down Jarrod Evans’s kick and then feeding Marshall who slid over the line with defenders unable to stop him. Cooney converted the second-minute score.

He then added a penalty five minutes later and on 20 minutes Ulster had their second try when Burns – after Alan O’Connor had secured a lineout ball after a penalty had been kicked to the corner – arced his way through a Marcell Coetzee-battered defensive line to dot down behind the posts.

Cooney did the necessary and the home side were now 17-0 up and half-way towards securing a try bonus.

From there, they should really have kicked on but a combination of errors and poor execution gave the Blues some unexpected traction in the game.

However, the Welsh side failed to take advantage of their visits to Ulster’s 22 – the returning hero Nick Williams putting Boyde through only for the flanker’s chip to be over-run by Lloyd Williams – and even with Marshall’s 39th-minute yellow card for being offside, the Blues still failed to score before the half ended.

The new half started badly for 14-man Ulster as winger Aled Summerhill darted over frighteningly easily and though the score went to the TMO due to Matthew Morgan’s apparent forward pass to Rory Thornton earlier in the move, the try somehow stood.

Evans converted and the Blues were back in it only for Ulster to win an immediate penalty, allowing Cooney to slot his second penalty.

Then three minutes before the hour mark, 15-man Ulster coughed up their second try. This time it curiously came after Will Addison had shown lovely footwork to get out of his 22 only for the ball to be lost at the breakdown.

Sensing a gap at the back, the Blues kicked through and though Jason Harries was stopped on the line by Mattie Rea and Louis Ludik, they recycled and it was a run-in out on the right for Boyde which Evans converted.

The game ended with Evans missing a long-range penalty which would have secured a losing bonus point.