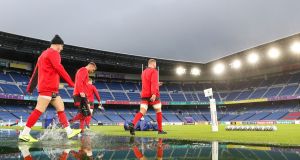 The weather hasn’t finished with the 2019 World Cup just yet. When it rains in Japan, it really does rain. On Friday, it never stopped in Tokyo, drenching the pitch at the International Stadium in Yokohama which is the venue for both semi-finals and final.

Akin to the opening weekend, when the All Blacks beat the Springboks and Ireland beat Scotland, which really does feel like a lifetime ago, the forecast was better for Saturday’s first semi-final between New Zealand and England, but the rain is due to return for Sunday’s meeting between South Africa and Wales.

England’s squad is based 30 miles away from the 72,327-capacity stadium in the Kanagawa prefecture, at the Disneyland resort to the east of Tokyo, but, due to the traffic congestion caused by the torrential rain, their captain’s run was delayed by 45 minutes.

In anticipating these kind of problems, the England head coach Eddie Jones deliberately delayed his team’s arrival for the warm-up game against Ireland at Twickenham to see how they reacted. They seemed to have coped all right.

It will probably be a kicking fest. They kicked 30 times against Japan so we have got to handle their game

The tournament organisers allow teams the option of holding their eve-of-match press conference at World Rugby’s team hotel, and so the All Blacks availed of that option after training nearby. The back-to-back champions had already familiarised themselves with the Yokohama stadium on the opening weekend when beating the Springboks.

With the clocks moving to winter time back home, so it is that although the semi-finals kick off at 5pm on Saturday and 6pm on Sunday in Japan, they each equate to 9am Irish time, and the weekend forecast added to the feeling that the Wales v South Africa semi-final would be more of a slugfest, with plenty of heavy hitting and aerial exchanges.

Looking ahead to his penultimate match as Wales’s head coach, in the fervent hope that the last will be the final rather than the dreaded third/fourth place play-off, Warren Gatland said: “Going into Sunday’s game it is going to be a tight game and we saw that first half of South Africa-Japan was a tight game. It will probably be a kicking fest. They kicked 30 times against Japan so we have got to handle their game.”

Wales, for their part, kicked the ball out of hand 34 times in their nerve-jangling 20-19 quarter-final win over France.

“It won’t be the prettiest game in the world,” Gatland forecast after naming a team which sees Ross Moriarty and Leigh Halpfenny replace the injured Josh Navidi and Liam Williams, although this is offset by the return of Jonathan Davies.

For us to get to the final of a World Cup, it will be unbelievable given the small playing numbers we have in Wales

Gatland confirmed that Dan Biggar will continue to assume the role of primary goalkicker, and, looking ahead to the duel, Handré Pollard said: “He’s a world-class goalkicker, we all know that. It’s no secret. But it’s on the day, we all know it’s going to probably come down to a kick or a drop goal. It’s semi-final rugby, so you must try your best to be on target with every kick. If it’s not to be, it’s not to be.”

As well as their kicking game, the Springboks will try to impose their scrum and maul, and be brutally direct and physical. Pollard readily admitted: “It’s not a game plan or rugby with a lot of flair in it. But it is suffocating.”

Gatland maintains he has the belief, as well as the fervent hope, that his last match in charge of Wales will be the final rather than the dreaded third/fourth place play-off.

“For us to get to the final of a World Cup, it will be unbelievable given the small playing numbers we have in Wales, the four teams. We feel like we continually punch above our weight. But the greatest thing about this group of players, since I have been involved with Wales, is when they put that red jersey on and play for Wales, how much that means.

“They know the opportunity they have got to represent Wales and I often ask simple questions that only they can answer. If you come off the field, whether you have won or lost, and you can look yourself in the mirror and say, ‘I tried really hard today,’ as coach that’s all I can ask for.

“Nine times out of 10, when they put that red jersey on and play for Wales, they have given 100 per cent. If we can make the World Cup final with the playing numbers we have got, it would be one hell of an achievement.”

1 Jim McGuinness: There is a way to save championship and make it competitive again
2 Sordid murder of hurling brothers still resonates in south Galway
3 Ireland’s work-ons: Four things Andy Farrell needs to address
4 Big four ready to rumble on hurling’s special weekend
5 Ireland’s clash against Georgia will be an important audition
Real news has value SUBSCRIBE