Cian Kelleher comes into Leinster team for trip to Zebre 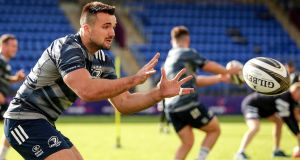 Leinster’s Cian Kelleher will start in their Pro14 clash with Zebre on Saturday. Photo: Laszlo Geczo/Inpho

As Leinster will look to maintain their unbeaten opening to the season in Italy, Leo Cullen has made several changes to the side that powered away from Edinburgh in the second half last time out at the RDS.

Cian Kelleher makes his first start in the Pro14 since returning to the province from Connacht during the summer while Adam Byrne comes in on the other wing as Dave Kearney and James Lowe are rested. The remainder of the backline has a familiar look.

Up front James Tracy gets his chance in the run-on team as does Ross Molony, who partners captain Scott Fardy at lock. A couple of backrow players will enjoy milestone appearances, Josh Murphy winning his 25th cap and number eight Max Deegan his 50th. On the bench Bryan Byrne and Ryan Baird are set to make their respective Pro14 bows this season.

Zebre, under the coaching baton of Michael Bradley, can call upon 10 of the Italian international squad who were in Japan, six of whom are in the starting team.

Over the coming weeks, the Ireland squad players will be reintroduced into the Leinster team, so for the younger generation, matches of this ilk are really important to continue to press claims for a place in the matchday 23.

Zebre won’t be as vulnerable as they have been in their first three matches this season given the glut of returning internationals and as Leinster discovered in a narrow victory against Benetton on the opening weekend of the league season, this could be a sticky test but one that they should negotiate nevertheless.