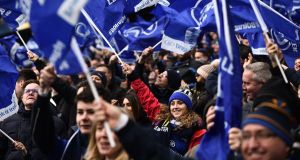 There are significant differences in the price of tickets for Leinster’s European Champions Cup semi-final against Scarlets on April 21st and Munster’s semi-final in Bordeaux against Racing 92 on April 22nd.

For a top end ticket it will cost fans €35 more to attend the match at the Aviva Stadium compared to Munster’s semi-final in France.

The Champions Cup semi-finals are European Professional Club Rugby (EPCR) events so the allocation and pricing of tickets is not determined by either of the two provinces but by the EPCR.

The last round of European matches, Leinster’s quarter-final against Saracens in Dublin and Munster’s epic against Toulon in Thomond Park were club events.

The maximum price for a ticket at the Aviva is €90 with a top-priced ticket for Stade Chaban-Delmas in Bordeaux coming in at just €55.

The top four ticket prices for the game in Dublin, two premium levels as well as category one and two tickets are being sold for €90, €80, €70 and €60, and are all more expensive than the highest priced €55 ticket for Munster’s game.

There is just one similarly priced ticket for both matches. A category 4 ticket, the second cheapest, to see Leinster play Scarlets costs €40 while a category 2 ticket in Bordeaux, the second most expensive on offer to Racing and Munster fans, is also €40.

Munster has no definitive number for sales just yet with tickets sold through EPCR and the Munster Supporters Club with packages also on offer through Munster Sports Travel.

The EPCR consults with the French National League (LNR) about what is suitable for ticket pricing in France and are also mandated to maximise the return from the semi-finals matches as well as the finals in both the European Champions and Challenge Cups.

Prices for the Bordeaux game have also been made competitive as fans from both semi-finalists must travel.

Munster fans have been traditionally good at supporting but French fans have been streaky in following their teams, especially for away ties, or in this case neutral venues. While Aviva Stadium holds just short of 52,000 and Leinster will hope to have it full for the match, Stade Chaban-Delmas has a 34,462 capacity and is not expected to be sold out.

In any event the more money EPCR make from the two semi-final matches, the more goes back into club rugby when it is disbursed.

In comparison a premier level ticket (East Lower Stand on the 22) for Leinster’s quarter-final match against Premiership side Saracens cost €67.95.

‘I want that gold medal’: Rhys McClenaghan talks Tokyo Olympic aspirations 07:00
Five Golf Classics for you to tee up at in 2020 06:00
Out of the shadows: Floodlights a priority for clubs across Ireland 06:00
AFL’s equalisation policies a possible guide for the GAA 06:00
Murphy confident Donegal remain on the right track 06:00
Here is your handy guide to sport on television this week