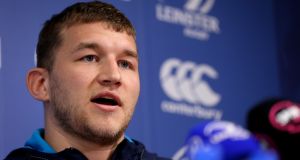 Ross Molony at a Leinster press conference at UCD. “I have ambitions to go further in my career and get a green jersey at some point.” Photograph: Oisín Keniry/Inpho

Max Deegan brought it up last week. Jordi Murphy stopped talking about it and is going to Ulster for next season. Like Murphy, Ian Madigan took flight.

Ross Molony knows what they are talking about. With three experienced players in front of him at Leinster, his struggle to get pitch time in the bigger games has been an ongoing challenge.

James Ryan, Devin Toner and Scott Fardy are a formidable trio to shift. But these days it has become the story of Leinster rugby. What to do, whether to go or stay put and fight your corner.

“It’s certainly been an interesting season,” says the lock with a smile.

“I’ve had two niggles throughout the year which reduced my game time a small bit. For me, it’s working on getting my body in the best possible position and make sure when I get the opportunities, I put myself in a position to get more.”

It is not that Molony is not playing, he is, with 16 matches so far this season and eight of those full 80 minutes. But only two of the 16 have been in European Cup ties against Montpellier, where he came off the bench for six and 16 minutes.

It means weeks like these are high value. The resting of international players is gold for those coming in. Molony rightfully does not limit himself.

“I have ambitions to go further in my career and get a green jersey at some point,” he says. “To do that, you have to play in those Champions Cup games because it’s right up there with international level.

“With the semi-final in mind I’ll give the coaches an opportunity to see what I can do this week. You kind of have to be (patient), there’s no point getting down and getting pissed off with yourself or anyone around you.”

Ryan is two years younger than Molony. But Toner is 31-years-old and contracted Australian Fardy, who plays backrow but was signed as a lock, will be 34-years-old in July. Ryan is highly unusual in how he has made an impact at international level at such a young age and in that position.

“He was two years below me, so I actually watched him winning the 13s cup,” says Molony. “He and Max (Deegan) were playing, then I played with him in sixth year and he was brilliant. As you see this year.

“Even as a fourth year he (Ryan) was putting an impact in that team, and got selected for the Senior Cup.”

Molony’s body is now in a good place and he’s eager to impress. He doesn’t believe it comes down to kicking on at Leinster or moving on as Madigan and Murphy have done. That’s too stark, although, Tadhg Beirne’s story of departure and return is heart warming.

“It’s a competitive environment, you’re always going to have people in your position,” says Molony. “You can’t control what coaches [think] or what other people do. All you can do is work on yourself.”