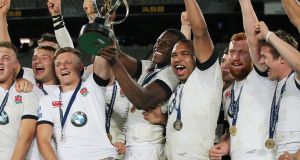 Maro Itoje is one of the few England internationals to make the transition from the under-20s to senior grade in a relatively short space of time. Photograph: Getty Images

Run through the underage results and this should be a golden era for English rugby. The evidence is undeniable. England have contested every under-20 World Cup final since 2008, bar 2010, winning three times since 2013.

Maro Itoje’s all conquering side thumped Garry Ringrose’s Ireland 42-15 in the 2014 semi-final while Harry Mallinder’s team had James Ryan’s men soundly beaten inside the opening 15 minutes of the 2016 final before running out 45-21 victors.

Such a success rate is only topped by the All Blacks finishing school (six titles in the same period). That England have reached two more under-20 finals, nine, than New Zealand indicates a flood of talent exists to fill the RFU and Premiership cupboards with silverware. European and world domination must be unfolding before our eyes, right?

After Ireland completed the Grand Slam last March, Eddie Jones stated: “We have to get a greater depth in our squad, and a depth of players who can play test rugby. I need to go back and look at the clubs and under-20s.”

Of the squad Jones cut to 25 players this week, Jack Nowell, Henry Slade and hooker Luke Cowan-Dickie graduated from the 2013 under-20s. Ross Moriarty is worth mentioning as the Dragons backrower switched allegiance to Wales after winning two Junior World Cup medals in ‘13 and 2014, before touring as a British and Irish Lion in 2017.

When fit, the once capped Ollie Devoto is a midfield contender while Anthony Watson was the starting Lions test winger against the All Blacks. Watson tore his Achilles at Twickenham on St Patrick’s Day.

A lack of genuine talent is not a valid excuse. See openside: the loss of Sam Underhill (22) to ankle surgery is covered by Tom Curry (20) who saw off 2013 captain Jack Clifford (25) to feature at the Aviva stadium on Saturday.

England retained their under-20s title in 2014, led magnificently by Itoje, with Billy Burns, Ulster’s newest Irishman, at outhalf. Besides Ringrose (and Dan Leavy who missed the tournament through injury), Jack O’Donoghue and Ross Byrne have been capped from Ireland’s group with Cian Kelleher expected to come through but, really, the 2016 Irish squad had a golden feel to them.

Ryan’s numbers, a once in a generation lock who constantly carries and tackles into double figures, is trumped by Jacob Stockdale’s 12 tries in 14 test matches while Andrew Porter fills an essential role relieving Tadhg Furlong since switching from loosehead to tighthead prop.

Jordan Larmour came a year later but England are also funnelling players like Leicester prop Ellis Genge (2015) into the senior ranks from the sides that contested the last six Junior World Cup finals. However, none of their 2016 team will reacquaint themselves with Ryan, Stockdale and Porter this weekend for numerous reasons. Mallinder, an imposing outhalf and natural leader, is out for the season following knee surgery.

“Some people are born leaders others it takes a bit longer,” Jones said last season. “It’s like being in a classroom; some kids get their maths tables quickly, some don’t. That’s a big area for us to get right. It does take time. We have spoken about leadership density on the field. That is a slow burner. You’ve got to keep building that.”

That’s the moment Jones gave the “lack depth of players who can play test rugby” quote. The follow up question provided a moment of clarity: “Where are the English leaders or are the structures broken from underage into clubs and over to the national squad?”

“That’s not for me to answer,” he snapped. “I think you all wrote about this in the 2015 World Cup. I don’t know why you are asking me these questions. I am only responsible for the national team.”

There it is, in stark contrast to The Schmidt Project, England’s fatal flaw during the 2019 World Cup cycle; players of real quality exist in vast quantities but they can’t find their way to the surface. With the relentless flogging by clubs facing the threat of relegation from the Premiership most of the players with under-20 medals, like Bath lock Charlie Ewels who captained the 2015 side or dazzling 2016 centre Joe Marchant, should get future opportunities to play for England.

If the bodies hold up. Maybe it is impossible to streamline a system with the growing injury rates that the RFU recently revealed (concussion being top of the pile). Not the responsibility of the England coach.