Ulster confirm they have signed a new ‘overseas’ outhalf 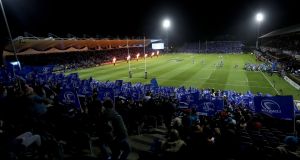 Leinster had too much for Ulster at the RDS on Saturday night. Photograph: Bryan Keane/Inpho

Ulster have confirmed the signing of a new foreign outhalf to replace the outgoing Christian Lealiifano.

The Wallaby, recruited on a short term deal to cover for Paddy Jackson, returns to Australia after the Wasps fixture in the Champions Cup on January 21st.

“We have got a new person to replace Christian and we will announce that in due course,” said Ulster director of rugby Les Kiss follow the 38-7 defeat to Leinster at the RDS. “It’s an overseas player and all that has been cleared so no problems.”

Kiss also confirmed Tommy Bowe damaged his sternum and could be out for up to eight weeks.

“We’ll do an examination on it but the doc says weeks, which could be up to eight weeks, and that’s a shame for Tommy.” Bowe, who turns 34 in February, is out of contract this summer.

Leinster will have to make do without James Tracy, damaged elbow, while Garry Ringrose (ankle) and Tadhg Furlong - who failed a Head Injury Assessment at half-time, which was unrelated to treatment he received for elbow damage on 22 minutes - are doubts ahead of Glasgow’s visit to Dublin next weekend.

1 Worst sporting moment: White knuckle ride on a hate-filled night at Windsor
2 Ronnie O’Sullivan’s erratic genius on show as he reaches final
3 Bundini Brown: The man who invented ‘float like a butterfly, sting like a bee’
4 Bayern hit Barcelona for eight on madcap night in Lisbon
5 Phelan says silverware would be fitting reward for United
Real news has value SUBSCRIBE