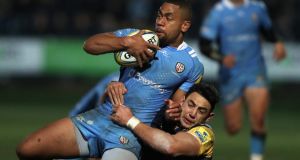 The London Irish wing Joe Cokanasiga joined England’s training squad in Brighton on Monday with Exeter’s Jack Nowell among five players who pulled out of the camp with injuries sustained during the weekend Premiership matches.

The elevation of the 20-year-old Cokanasiga, who was born in Fiji but moved to England with his family when he was three, means that Gloucester, who finished 2017 fourth in the Premiership table, are the only top-flight team not called on by the England head coach Eddie Jones for his training squad.

Cokanasiga, who was called up by Jones for last summer’s tour to Argentina, has made 10 appearances for Irish this season and is yet to score a try in the campaign for the club that is adrift at the bottom of the table. He only touched the ball twice during his side’s latest defeat against Newcastle on Saturday before being replaced 11 minutes from the end, but at more than 6ft 3in and nearly 18st, his rawness is outweighed by speed and power.

Nowell suffered an ankle injury during Exeter’s bonus-point victory over Leicester on Sunday that sent the champions into the new year with a 10-point lead over the team in second in the Premiership, Saracens, but played on until the 75th-minute. The Chiefs’ prop Harry Williams pulled out of the Brighton camp having left the field with concussion on the hour.

The Northampton outhalf Piers Francis also withdrew with concussion, while the Bath secondrow Charlie Ewels suffered a hamstring strain during his club’s Friday night defeat to Wasps at the Recreation Ground.

The Bath prop Henry Thomas, who returned to action last month after more than a year out with ligament damage in his left knee which required two operations to sort out and left him seeking the help of a mind coach, is the other player called up by Jones, who originally picked 34 players for the camp.

That number will be cut on January 18th when Jones names his squad for the Six Nations, a tournament England are looking to win for what would be a record third successive season. – Guardian service