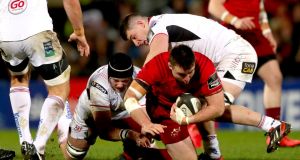 Munster hooker Niall Scannell could be out for four to six weeks after damaging ribs in his province’s defeat to Ulster on Monday. Openside Tommy O’Donnell will see a specialist to determine the extent of a shoulder issue but the initial indication is that the flanker, who has been very unfortunate with injury, could be out for a significant amount of time.

The 25-year-old Scannell, who has seven caps for Ireland, missed the November test series with a broken thumb and now looks like being unavailable for Ireland’s opening two Six Nations Championship fixtures against France and Italy.

O’Donnell may have suffered a recurrence of the shoulder injury that sidelined him recently and according to Munster coach Johann van Graan potentially faces an extended period on the sidelines. The injury legacy from that defeat to Ulster was significant as Billy Holland, who has played in every competitive match for Munster this season, will miss Saturday’s game against Connacht.

Holland and openside flanker Chris Cloete, who both underwent HIAs in Belfast, won’t be available for the Connacht game as they follow the return to play protocols. Wing Calvin Nash (hip) is also unlikely to feature. Hooker Rhys Marshall won’t be considered for the weekend after sustaining a head knock against Leinster on St Stephen’s Day.

Chris Farrell, who sustained a knee injury in the Test match against Argentina last November, has returned to team training while Ronan O’Mahony (illness) is expected to be fit.

Meanwhile, Caelan Doris will miss Ireland’s Under-20 Six Nations Championship after suffering a grade two hamstring tear that will sideline him for eight weeks. It is a significant blow for Noel McNamara’s team as the number eight is an outstanding prospect and was a pivotal figure for his country when playing a year young for this age-grade last season.