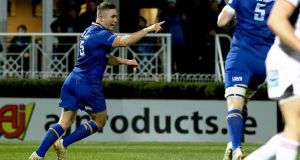 Plenty to see here. Some worries – like injuries to Tadhg Furlong, Garry Ringrose and James Tracy – but mostly this game showcased the good health of Irish rugby through the prism of Leinster wonderkind Jordan Larmour.

The 20-year-old, shining from fullback on this night, has it all.

Here marks another milestone for Larmour’s electric surges, for two tries, while Andrew Porter tore up some Ulster trees when coming in for Furlong. But spare some praise for rugby’s ultimate survivor, Fergus McFadden, and his two tries, clearly inspired amidst a sea of super talented young Irish wingers.

The first half almost ended with Ulster on the attack. It was only their second raid into Leinster territory (a place these blue clad men almost prefer to exist nowadays; camped near their line bashing single ball carriers backwards in gangs of two or three). This particular siege wasn’t lifted by a herculean defensive effort, rather Sean Reidy flinging possession into touch as Jacob Stockdale was poised to make it a one score game at the turn.

Leinster broke out with Ringrose offloading to Ross Byrne. The outhalf, with a perfect grubber that bounced up on the tryline, bet on Larmour to out sprint Andrew Trimble. Larmour streaked clear yet the score was denied by Iain Henderson appearing from infield to block a clean grounding. Referee George Clancy considered a penalty try before blowing for a knock-on.

Ulster were blessed to only trail 12-0. They were in dire straits from five minutes when Larmour nimbly stepped inside Stockdale – a statement in itself – after Byrne catapulted McFadden through the Ulster guts.

Leinster kept pounding away with Barry Daly doing Charles Piutau on the outside after a nicely delayed Larmour pass for a slick second try.

The Ulster stalwarts could only stall the rout. Rory Best remains the undisputed Ireland hooker (Tracy appeared to follow Niall Scannell into the medium term injury category so Sean Cronin’s international career lives on!) but the captain, Trimble and Reidy were plugging multiple holes on a creaking ship.

La Rochelle, who visit Belfast next weekend in the Champions Cup, will be licking their lips.

Tracy’s loss was barely felt but Leinster (and Ireland) coaches touched wood when Jack Conan and Furlong seemed to recover from what initially looked serious harm. However, Porter replaced Furlong at the interval.

Josh Murphy and Jordi Murphy deserve a special mention. The young and elder flankers caused havoc over Ulster ball that promising scrumhalf Jonny Stewart, on his first start, won’t forget. The messy supply line denied Christian Lealiifano – who Ulster simply must replace with a similar calibre player by February – any sort of rhythm.

The next try seemed certain to be Robbie Henshaw’s but Byrne’s pass was intercepted by Stockdale’s smart read. The Ireland left wing was denied a clean 80 metre run away by his own ice cold finger tips.

The result should have been cooked early in the second half only for the intervention of television match official Peter Fitzgibbon.

Larmour magic, again. The former St Andrew’s schoolboy was denied another stunning try – for his growing collection – when Jamison Gibson-Park re-gathered his lovely weighted kick to send him over. The officials noticed Gibson-Park was ahead of the toe poke.

The Ulster penalty was mere reprieve.

On 47 minutes the 17,373 audience let out their loudest roar when McFadden stepped inside Stockdale, who can no longer be certain to start for Ireland, after excellent work by Larmour and Cronin.

That noise quadrupled four minutes later when Porter rampaged through Darren Cave and Stockdale. The converted tighthead drew the last defender before feeding Gibson-Park who put McFadden away for the bonus point (50 metres down field Jack McGrath and Cronin leaped on their fellow frontrow soldier).

All Les Kiss could do was unleash the Leinster born players on the Ulster bench. It mattered little. These provinces seem light years apart at the moment.

The visitors saw what Jordi Murphy will carry north in July when the Ireland flanker hammered over the gainline before slick hands by Johnny Sexton and Robbie Henshaw put Larmour over again.

Ulster eventually responded when Tommy Bowe made a break, injuring himself yet again in the process, before Stockdale finished it off.

One province in as deep a trough as the other’s peak, Sexton ran in the last try just for kicks.

1 Tyrone’s McShane ruled out for rest of the season
2 Andy Sullivan fights back tears as he wins English Championship
3 Liverpool to sign Olympiakos left back Kostas Tsimikas
4 Sporting Cathedrals: Semple Stadium, the very centre of the hurling universe
5 ‘Embarrassment, anger, sadness’: the decline of the great Stephen Hendry
Real news has value SUBSCRIBE