Ulster book their Champions Cup spot with win over Ospreys 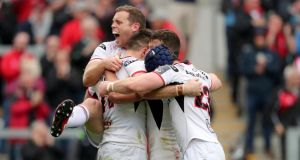 It wasn’t pretty, but that hardly mattered as Ulster ensured that their season of unprecedented difficulty at least ended in upbeat fashion as the province kept their place in next season’s Champions Cup.

A five-game unbeaten run for departing head coach Jono Gibbes – though he may yet rack up at La Rochelle instead of Waikato after last week’s trip to France – was no bad way to sign off and in fairness to Ulster they won this playoff with plenty to spare as the province’s former assistant coach Allen Clarke now takes his Ospreys side into the Challenge Cup.

John Cooney had yet another enormously prominent game and ended Sunday afternoon kicking 15 points and generally setting the tone with his huge workrate which may yet bag him a place on Joe Schmidt’s squad for Australia.

Craig Gilroy also managed a brace of tries, either side of half-time, while Kieran Treadwell and Jacob Stockdale crossed the Ospreys line with Ulster pushing on rapidly after only leading 8-7 at the break.

This was no mean feat as the province lost Charles Piutau – now on his way to Bristol – and prop Ross Kane prior to kick off before quickly losing Louis Ludik and Callum Black to injury – all of that on top of already having to cope without Rory Best and Iain Henderson.

So, something of substance for new coach Dan McFarland as Ulster bid to put their season from hell firmly behind them while the Ospreys, who managed three tries to Ulster’s four, and saw Dan Biggar miss eight points after hitting the upright three times, now limp away from Europe’s elite competition.

Biggar hit the post early on with a fourth minute penalty but the staccato structure to the early part of the game was broken after 14 minutes after Biggar had put a penalty deep into Ulster territory.

The result was another Alun Wyn Jones and Justin Tipuric combination with the former taking the lineout and the flanker splintering off and driving towards the home side’s line.

The net result saw Wyn Jones regain possession at the base of the subsequent ruck and easily drive under Robbie Diack and Kieran Treadwell to score. Biggar slotted a great touchline conversion and the Ospreys were up and running.

This roused Ulster and after putting their own penalty into the visitors’ 22, Luke Marshall chipped in behind the Ospreys cover with the ball sitting up for Gilroy to touch down in the right corner.

Cooney, though, missed the tricky conversion but Ulster now led 8-7 as the sides turned around.

Ulster came charging out of the blocks one minute after the restart when Cooney got his hands on a loose Ospreys pass and Johnny McPhillips’s chip down the right wing saw Gilroy beat Biggar to the touchdown.

Cooney’s excellent conversion put Ulster 15-7 ahead. They then stretched their lead to 22-7 on 52 minutes following some pandemonium behind the Ospreys line.

At the second time of asking from the five-metre scrum, Kieran Treadwell surged over the line after Stuart McCloskey and Robbie Diack had done some initial softening up.

Cooney added the more straightforward extras and the home side had stretched their lead to 22-7.

Winger Jeff Hassler got on the end of a James Hook pass to make the corner but Biggar was off target with the conversion of the 60th minute score.

Four minutes later, Cooney’s second penalty put the home side 25-12 ahead before his third took it to 28-12.

Stockdale then intercepted a Hook pass to sprint in under the posts with Cooney converting, though the Ospreys got over with three minutes left thanks to Biggar who hit the post for the third time in the game with his drop goal conversion.

Replacements: C Allen for Dirksen 47 mins, S Cross for Lydiate 49 mins, R Jones for Otten, M Fia for Arhip and M Aubrey for Watkin all 53mins, J Hook for Watkin 55mins, I Phillips for Smith and A Beard both 70mins.