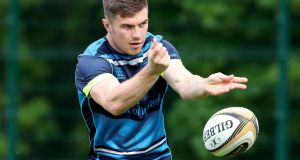 Luke McGrath: starts at outhalf for Leinster in the absence of Johnny Sexton. Photograph: Bryan Keane/Inpho

If these two sides met in an open field in front of two men and a dog there’d be an edge to it, and a semi-final one week on from Leinster winning their fourth European Champions Cup final at a packed RDS should be no different.

Indeed, a crammed RDS on a sunny day in May should make for a vibrant setting, for what is Munster’s first visit here since losing 16-6 at the same stage eight years ago. On four visits here Munster have won once and lost three times.

Aside from the customary bragging rights whenever these two lock horns, the prize is significant. For Leinster, victory would earn them a place in their eighth final, and put them within one game of becoming the first side to win a European Cup/Pro14 double. Currently the joint most successful side in the competition’s history alongside the Ospreys, they are also seeking a record fifth title. For their part, Munster are pursuing a fourth title, having last lifted the trophy in 2011.

Since then Munster have lost one quarter-final (in Europe), six semi-finals (four in Europe) and two finals (both in the Pro12). Such consistency in various pool and regular season campaigns is to be admired. There have also been three quarter-final wins in Europe and a couple of Pro12 semi-final wins before the quarter-final win over Edinburgh a fortnight ago. However, nine defeats in 14 knock-out games over the last seven seasons is something they’d dearly like to put right.

Yet Leinster have plenty of memories to atone for as well, such as losing their last Pro14 game here to Benetton and their most recent outing in this competition when suffering a record defeat to Connacht, not to mention last season’s semi-final beating to 14-man Scarlets. That remains the only away win in 20 semi-finals in this competition.

Perhaps the most pertinent memories of all go back to 2011 and 2012, when Leinster suffered two of three defeats in the final one week after conquering Europe, games to Munster in Thomond Park and the Ospreys at the RDS.

That neatly encapsulates how difficult a challenge it is, emotionally and mentally as well as physically, to back up the ultimate achievement in European rugby just a week later against opponents who have been refreshed from a weekend off and lurking in the long grass.

Leo Cullen was captain on those occasions and yesterday admitted wryly: “I remember those weeks very, very well. There’s a couple of things we did this week with that in mind. So we’ll see if we can alter [the outcome]. We weren’t able to alter it in 2012, after 2011, but I’ve had six years to think of things since!”

Perhaps one of those things was to refresh the side a little more in making six changes in personnel from last week’s starting line-up.

Having used 55 players this season, Cullen revealed this had been a particularly difficult selection. Ross Byrne replaces Johnny Sexton, whose tight calf should heal next week were Leinster to reach the final, with Isa Nacewa switching to inside centre for his RDS farewell in the absence of Robbie Henshaw.

Joey Carbery comes in at full-back for Rob Kearney, James Lowe is back at left wing, Jack McGrath rotates with Cian Healy, and Rhys Ruddock and Jack Conan come into the back row, with Jordi Murphy moving to open side in what will also be his RDS farewell game as Dan Leavy is rested with a slight hamstring strain. But who can possibly emulate Leavy’s remarkable weekly workload?

Scott Fardy is included in a strong bench, having started 19 of his previous 20 games, with Max Deegan, Nick McCarthy and the Pro14’s leading try scorer, Barry Daly all brought into the match-day squad.

For their part, Munster arrive rested and more settled, if less buoyant. Stephen Archer’s absence is offset by the return from injury of John Ryan, which is Johann van Graan’s only change from the starting line-up against Edinburgh. Niall Scannell and Duncan Williams also return to the bench. So JJ Hanrahan is afforded only his second knock-out or European game at outhalf for Munster and starts a third game in a row for the first time since his prodigal return from Northampton.

They will surely bring plenty of line speed to their defence and compete fiercely at the breakdown, and test the Leinster back three in the air through Conor Murray’s peerless kicking game. They’ll also have all the motivation in the world, some ball carrying ballast off the bench and a potent outside three of their own.

“Munster have gone about things in a different way,” said Cullen of Munster this season. “They do kick a lot with Conor Murray at nine in all sorts of areas of the field, even if it is attacking on the 22. They are dangerous. They have some good guys in the air as well. We’ll see how they play and how it is refereed. Stuart Berry is referee and he is usually pretty strong on guys loitering at the back of the tackle and hopefully the game will be a nice, clean contest and we are able to see the ball move around the place.”

So much of these meetings comes down to the day that’s in it, with form often an inaccurate barometer, witness how Munster were underdogs in the two’s first European Cup semi-final in 2006, and the roles were reversed when Leinster avenged that defeat at the same stage three years later. Hence they are also fiendishly difficult games to forecast.

Yet the RDS factor and Leinster’s strength in depth does entitle them to be marginal favourites. But in a one-off meeting, Munster are always capable of winning. It could hardly be set up more intriguingly.