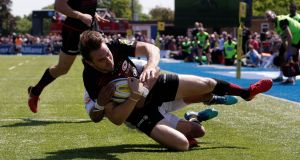 With the try count 6-5 in Saracens’ favour, it was Farrell’s unblemished 27-point haul that really made the difference after Dai Young’s swashbuckling underdogs had burst into life having trailed 30-5 early in the second half.

A relentless display by the home pack underpinned a victory that secures a place in next Saturday’s final at Twickenham, but once the game had opened up it was Wasps who set pulses racing in glorious conditions.

England endured mixed news ahead of their tour to South Africa, welcoming the return of number eights Billy Vunipola and Nathan Hughes from long-term injury but seeing Jack Willis helped from the pitch with suspected knee damage.

Vunipola needed treatment on the tight hamstring that delayed his comeback from a fractured arm and he failed to appear for the second half, but Saracens confirmed this was precautionary.

Hughes was expected to miss the rest of the season following knee surgery and had been omitted from the England squad destined for South Africa as a result, but having completed three quarters of the showdown in north London he could be a late addition.

That prospect grew more likely when Willis, the uncapped Wasps flanker whose superb form earned him a spot on the tour, departed in considerable pain in the 38th minute.

Eddie Jones watched the injury developments from from the stands accompanied by Paul Gustard – possibly as a show of unity after England’s defensive mastermind was interviewed for the vacant head coach’s post at Harlequins.

Gustard would have been shaking his head as the defensive shortcomings that have plagued Wasps throughout the season surfaced as early as the second minute as Farrell slipped between Ben Harris and Joe Launchbury before sending Alex Lozowski over.

The one-way traffic continued as quick ball offered the freedom of Allianz Park, but there was nothing spectacular about the second try as a series of drives ended when Vincent Kock barrelled over.

Willie le Roux started and finished a try that also involved Hughes and Christian Wade, but it merely served as a brief interruption to Saracens’ dominance.

That dominance appeared to resume when Chris Wyles dived over in the left corner shortly after half-time, but Wasps sprang into life when Jake Cooper-Woolley powered across the whitewash a minute later.

A wonderful pass by Danny Cipriani released Wade on the loop and the former England wing sprinted in to space before finding Thomas Young, who showed impressive speed to finish under the posts.

It was then the favourites who threw off the shackles as Schalk Brits and Sean Maitland made ground for Juan Figallo to score.

Itoje and Wade exchanged late tries before Saracens’ replacement scrumhalf Ben Spencer weaved a path over the line to end the rout.