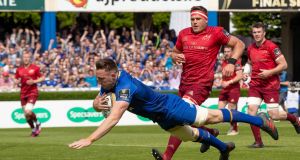 Leinster’s Jack Conan scores the opening try in the Guinness Pro 14 semi-final against Munster at the RDS. Photograph: Morgan Treacy/Inpho

Proof, were it needed, that there is truly no rivalry in the global game quite like this one. Another titanic, ding-dong battle couldn’t have been closer, leaving both teams and sets of supporters exhausted, albeit in wildly contrasting emotions. These two rarely do dull and this never fell into that category for a solitary minute in a rip-roaring tussle.

At the end of it all, an historic double remains with Leinster’s remit.

They will meet the defending champions the Scarlets at the Aviva Stadium (kick-off 6pm) next Saturday in a repeat of both last season’s semi-final in this competition and more recently in the European Champions Cup.

For Munster, it was a cruelly anti-climactic finale to the season. Their barren stretch without a trophy now goes back to 2011, this being their seventh semi-final defeat (four in Europe) since then, along with two final losses in this competition.

Regrets, Munster will have plenty after generating almost 60 per cent of both the territory and possession, but conceding 14 penalties to just six from Leinster hurt them badly.

In so many ways this was a celebration of a wonderful rivalry. Under clear blue skies and in temperatures reaching 22 degrees, conditions were akin to Munster’s European semi-final in Bordeaux, and what Leinster might have expected, and wished for, in Bilbao.

There were many marginal calls and moments along the way, but in the final analysis Leinster’s superior skillset and passing accuracy perhaps explains why they won by the slenderest of margins. They also had huge performers, in contrasting ways, in James Ryan (who else?) and James Lowe.

The presence of Joey Carbery at fullback also gave Leinster a second playmaker at first receiver or in the midfield channels, and they used him liberally, to augment hard carries through the middle with plenty of width.

Munster tried to match such ambition, going wide themselves even quicker at times, but almost too quick for their own good. Their passing accuracy was not as sharp, not helped by them pushing long floated passes from midfield edges in a clearly pre-ordained tactic. But they regularly drifted forward, especially with the breeze behind them in the first half, before tempering their game to better effect after the break.

However, they also brought unquenchable spirit to roll with many punches, and initially strong set pieces – although there was a key second-half turnaround in the scrum – and plenty of big carries, particularly in the likes of Rhys Marshall and Jean Kleyn, with their back three always looking dangerous.

Leinster looked set to blow Munster away initially, going through seven phases in their own half before Simon Zebo gathered Luke McGrath’s box kick.

There was one lovely skip pass from JJ Hanrahan to James Cronin on the edge of a four-man pod, for the loosehead to make a half-break and offload to John Ryan, but otherwise Leinster made all the early running.

After Peter O’Mahony stole Leinster’s second throw, one of several big early hits by Jack Conan – this one on Kleyn – led to a counter-rucking turnover for Jordi Murphy to emerge with the ball as South African referee Stuart Berry allowed players to dive onto the ground with impunity.

Zebo, with help from Stephen Archer, eventually hauled down Lowe, before Conor Murray made a vital tackle on the supporting Isa Nacewa. But a couple of phases later, Jack McGrath offloaded deftly inside to Lowe, who beat Sam Arnold and stepped Zebo brilliantly, before offloading as he was hitting the deck for Conan to gather and score. Ross Byrne converted.

The furious, almost reckless, physicality of the initial stages almost had to have a casualty and the curse on Munster’s backrow, especially openside, struck again when the in-form Jack O’Donoghue was stretchered off what appeared a bad knee injury. In the absence of Chris Cloete and Tommy O’Donnell, Robin Copeland came on at number eight, with CJ Stander switching to openside.

Good direct carries off a lineout by Rory Scannell and Marshall, with quick ball and transfers by Murray, lured Leinster offside for Hanrahan to open Munster’s account.

After Carbery fielded Murray’s slightly overdone box kick, Ryan made another break from Tadhg Furlong’s typically deft transfer, and when Billy Holland was pinged for not rolling away, Ross Byrne made it 10-3.

Somehow it stayed that way until half-time.

A rare Leinster handling error allowed the Munster scrum to shove Leinster back, and with a penalty advantage Murray made a big break before linking with Conway. But Hanrahan’s 40 metre penalty for offside was wayward.

Munster put together their best phased attack of the half nearing the break after Murray gave Earls a run up the right, but Ryan was a brick wall in preventing Stander from scoring. It wouldn’t have counted anyway, as on recourse to the video, Stuart Berry sinbinned Jean Kleyn for his head-to-head clear-out on a prone Ross Byrne.

Holland did manage a steal off the Leinster maul, but the half ended with Ringrose emptying Zebo, with the Munster full-back not helped by the height of Murray’s pass.

But Munster returned for the second-half with renewed intent, especially at the breakdown, where Robin Copeland won the second of two quick turnovers. Marshall made important yards after bouncing to his feet when not held, and after Scannell jinked up the middle, Murray’s long skip pass gave Zebo a two-on-two. Drawing in Joey Carbery, he popped a one-handed pass to Earls, who skipped inside Byrne and took Seán Cronin’s tackle for a try with 14 men.

However, Ian Keatley (on for the injured Hanrahan at half-time) couldn’t land the touchline conversion, and when Keatley and John Ryan were penalised for being in front of Murray’s box kick, Byrne made it 13-8.

A big penalty call at a scrum by assistant referee Craig Evans gave Byrne the chance to further extend Leinster’s lead, but his penalty drifted wide in the tricky wind. After some more dancing by Earls, O’Mahony’s superb skip pass enabled Zebo to chip Carbery but the fullback turned and recovered to win a favourable bounce.

Munster gave Arnold a run up the left, but his chip infield was well gathered by Luke McGrath, whereas Lowe then found a good touch and a well-worked set move launched Ringrose up the middle.

Unsurprisingly, given the heat and particularly the tempo and intensity, cometh the hour both sides were beginning to look a little weary, as both sides went to the air sooner than they had been doing in the first-half.

But Zebo’s desire to counter hard led to another sustained attack, Copeland and Gerbrandt Grobler adding real intent to their carrying game before Cian Healy came through on Murray. Munster opted for the corner rather than attempt to make it a two-point game; Murray’s punt to the corner bringing both sets of fans to their feet and full voice. Leinster disrupted the throw, and when Munster again went through the phases, James Tracy latched over the ball from Kleyn’s to win a relieving penalty to thunderous roars.

When Lowe returned Murray’s over-cooked box kick with interest, Murray had to deflect the ball infield, gather and feed Zebo, who had time to kick long or space for a chip, ill-advisedly opted to find Darren Sweetnam on the outside with a pass which floated forward.

The resulting scrum led to a highly debatable penalty against James Cronin, when Andrew Porter looked just as culpable for hitting the deck, and Carbery gave Leinster a two-score lead in the 77th minute with a sweetly struck penalty.

Munster went through the phases furiously one more time, and after a quick tap by Murray, Grobler picked up and touched down at the base of the upright. Keatley’s conversion made it a one-point game.

With almost 79 minutes up, Leinster restarted one last time and Munster had one play to score from deep in their own 22. Zebo made a stunning break, stepping Tracy, beating one more tackle, fending another and offloading to Earls’s terrific line. Murray then retrieved Earls’s deflected pass, and they’d inched into the Leinster 10-metre line when Kilcoyne trucked it up and Berry adjudged Max Deegan, just on, had released and was supporting his own body weight when awarding Leinster the final penalty.

Ultimately, it had come down to one point and one marginal decision, on top of a truckload of other moments along the way. Nope, these two don’t do dull.