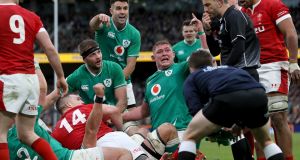 There is a Native American parable that tells the story of a great chief commencing the warrior training of his grandson. The wise old chief tells the boy that there are two great wolves inside the mind of every warrior. One is a nurturing, creative, positive and proud wolf. The other is a cruel, toxic, destructive and evil wolf. These two alpha wolves rage a constant battle for control of the warrior’s mind.

The young boy pauses to think, then asks: “Which wolf wins?”

The ancient warrior smiles at his grandson and gives the obvious answer.

For 18 months this Irish team have been feeding their toxic wolf. Self-doubt, blaming others, making excuses, low aggression and a lack of accountability have all provided sustenance for the big, bad, wolf inside their heads. Body language does not talk, it screams, and if you watched Ireland’s play over the past year, you could hear their slouched bodies yelling at the universe: “I don’t believe we can win.”

The Irish pack erupted into a back-slapping, howling at the moon mass of energy balls

Against Wales, when the game was in the balance during the second half, Ireland were defending their try line. They produced a heroic series of tackles that forced a Welsh five-metre scrum. At the scrum Dave Kilcoyne drove the Welsh tighthead prop, Dillon Lewis, into the turf and won Ireland a match-defining penalty.

The Irish pack erupted into a back-slapping, howling at the moon mass of energy balls. The backs rushed to join the “love-in”. Scenes not witnessed since Ireland put New Zealand to the sword in 2018. You could see the tension and pain of 2019 begin to drain away from the Irish players.

Caution is required here, as Ireland’s rehabilitation is not yet complete and they are nowhere near the standards of 2018, but they have begun to rediscover their self-belief. When self-belief emerges, aggression becomes as tangible as a wolf.

The greatest example of this is Tadgh Furlong. The sensational form he displayed in 2018 should have seen him nominated as a World Player of the Year. Then in 2019 his form mysteriously vanished.The storming ball carries and quality passing that set him a class above every other tighthead prop in the world evaporated.

Two weeks ago, against Scotland, the embers of that old form began to glow. Against Wales, his confidence burst back to life. Furlong scored a hard-running, leg-pumping try and delivered several highly skilled passes.

Twickenham, with all its complex challenges, is looming large, so any Irish mental frailties not yet exorcised from the annus horribilis of 2019 will be regurgitated up onto the world stage. That won’t be pretty.

Eddie Jones and England’s disrespectful public utterances, regarding brutal physical violence against France and the deplorable use of the word “hate” towards the Scots, dishonoured rugby’s ethics and values.

The English have an obvious plan to talk to their opposition through the media. This is not new, but the English decision to use words of violence has deeply undermined their position as role models and leaders in their rugby community. As stewards of the game, players and coaches have a responsibility to care for the game. Trash talk trashes the game.

The lesson to heed is that coaches, athletes and every person in society must deliberately choose the words we speak and the words we allow into our minds. The great 19th-century American philosopher Henry David Thoreau was not a rugby player or a sports psychologist. He withdrew from the world to write beside an isolated lake named Waldon Pond.

To make a deep mental path, we must think over and over the kind of thoughts we wish to dominate our lives

A genius, an intellectual and a hippie, born more than a century before Woodstock, he wrote: “As a single footstep will not make a path on the earth, so a single thought will not make a pathway in the mind. To make a deep physical path, we walk again and again. To make a deep mental path, we must think over and over the kind of thoughts we wish to dominate our lives.”

Thoreau tells the same story as the warrior chief told his grandson. Frequently feed our internal good wolf with positive self-talk and starve the bad.

Sports psychology is overwhelmingly packed with proof that our internal “self-talk” is a major factor in self-belief, confidence and quality performances.

Jim Afremow’s excellent book The Champion’s Mind is an athlete’s guidebook to developing strong mental skills for sport and life. Afremow tells us that while Muhammad Ali screamed at the world, “I am the greatest”, he was really telling himself, over and over again, he was the GOAT – the Greatest of All Time.

Ali himself said: “It’s the repetition of affirmations that lead to belief. And once that belief becomes a deep conviction, things begin to happen.”

Ireland’s self-belief and confidence has improved. That conviction will be paramount as high-quality away performances have their foundations in strong mental skills. Ireland’s good wolf, for so long the underdog, has started to win the internal battle. It will have to grow even more for Ireland to win at Twickenham, which is the belly of the English beast. We should all be prepared for the trash talk to come. Remembering that Eddie Jones once described the men in green as “scummy Ireland”.

Ireland cannot control what England say, but the Irish players, coaches and the other four million of us can control how we think.

Let the English trash talk feed the good wolf inside us all.

2 Six Nations 2021: This feels like the real start for Andy Farrell’s Ireland