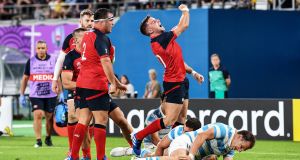 England are facing a backlash from fans after announcing their autumn clash against Argentina will begin at 8pm. The second of the four Quilter Internationals on November 14th has been allotted a controversial evening time slot despite the problems it creates for supporters attempting to get home from Twickenham. The series-headlining clash with New Zealand a week earlier will also start at a later time of 5.30pm, with only the two remaining games against Tonga and Australia given the mid-afternoon kick-offs that are customary for November Tests.

It will be the first time Twickenham has hosted an 8pm start since the 2015 World Cup and strong opposition to the Rugby Football Union’s decision has been voiced by fans online. Apart from deterring supporters from outside the south east from making the journey, it is also problematic for those closer to London due to traffic congestion and the numbers passing through a chaotic Twickenham station on over-crowded trains. The RFU declined to explain the timings when approached but the governing body has a transport plan in place that will include shuttles to Richmond and Hounslow where there are additional train and tube links.

Twickenham continues to stage concerts in the evening but these have a maximum capacity of 55,000 – 27,000 below the limit for an England international. The completed line-up of opponents was announced on Thursday with the visit of Tonga on November 21st finalising the schedule.

England beat Tonga 39-10 at last year’s World Cup and the fourth meeting between the rivals will also be their first held outside of the global showpiece. The Pacific Islanders are ranked 13th in the world.