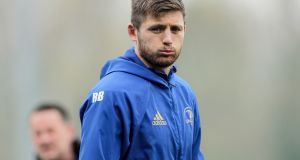 Ross Byrne is starting at outhalf for Leinster in the Pro14 final. File photograph: Inpho

Leinster captain Johnny Sexton has been named among the replacements for the Pro14 final against Ulster on Saturday evening (kick-off 7.35pm). Ross Byrne will wear the number 10 jersey, as head coach Leo Cullen keeps one eye on the Champions Cup clash with Saracens on Saturday week.

Cullen has made a number of changes from the team that accounted for Munster in the semi-final with Garry Ringrose named as captain for the first time.

The back three remains unchanged - Jordan Larmour is selected at fullback after coming through the graduated return to play protocols successfully this week with Hugo Keenan on the right wing and James Lowe on the left. Robbie Henshaw is again selected at inside centre with Ringrose outside him in the number 13 jersey.

The halfback partnership sees Jamison Gibson-Park and Ross Byrne start at nine and 10.

In the pack there is no change in the frontrow with Cian Healy, Rónan Kelleher and Andrew Porter again selected. James Ryan has recovered from injury to take his place in the secondrow alongside Devin Toner. Caelan Doris remains at blindside flanker with Josh van der Flier at openside and finally Jack Conan will wear the number eight jersey. Neither Dan Leavy or Tadhg Furlong have been deemed fit enough to be included in the matchday squad.

Ulster have been boosted by the return of club captain, Iain Henderson, who will be making his first appearance since the season resumption, and is one of four changes to the side that defeated Edinburgh in last week’s thrilling semi-final at Murrayfield.

Alan O’Connor will partner Henderson in the secondrow, while the frontrow of Eric O’Sullivan, Rob Herring and Tom O’Toole is retained. The backrow sees one change, with Sean Reidy coming into the starting line-up at openside flanker. Matthew Rea takes the blindside flanker position and Marcell Coetzee packs down at number eight.

The back three sees two positional switches, with Jacob Stockdale moving to the left wing, while Rob Lyttle swaps over to the right. Joining them at fullback is Michael Lowry, returning to the starting XV. Stuart McCloskey continues his midfield partnership with James Hume. Former All Black scrumhalf, Alby Mathewson, will make his first start for Ulster alongside Billy Burns at outhalf.

1 Sordid murder of hurling brothers still resonates in south Galway
2 Car sliced in half but Grosjean survives huge crash at Bahrain Grand Prix
3 Jim McGuinness: There is a way to save championship and make it competitive
4 Once in a blue moon: Cavan’s overnight success 15 years in the making
5 Ireland’s work-ons: Four things Andy Farrell needs to address
Real news has value SUBSCRIBE

Ireland grind their way to grisly win over Georgia 16:42
Ireland 23 Georgia 10: How the Irish players rated 16:38
Aaron McEneff’s two goals leave Shamrock Rovers in sight of the double 16:20
Car sliced in half but Grosjean survives huge crash at Bahrain Grand Prix 15:11
Mike Tyson and Roy Jones Jr fight to a draw in Los Angeles 12:18
Here is your handy guide to sport on television this week