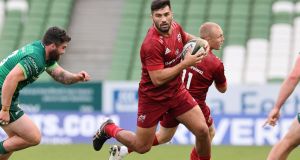 Damian de Allende in action for Munster during their win over Connacht. Photograph: Billy Stickland/Inpho

The dice appears to be loaded against Munster, what with the injuries they suffered to both locks, RG Snyman and Jean Kleyn, and prop David Kilcoyne, in their first game after lockdown against Leinster, and the two province’s contrasting six-  and five-day turnarounds since last weekend.

Yet Munster’s experienced and well-travelled forwards coach Graham Rowntree remains uber-confident that none of these factors will come into play for Friday’s eagerly awaited Pro14 semi-final at the Aviva Stadium on Friday evening.

“We’re in great condition,” stressed a decidedly upbeat Rowntree in a briefing with the media on Tuesday. “There’s no further injury updates, no fresh injuries. They’re in good nick, we put in a bank of training this summer, mindful of the programme that we’re coming back into.”

“So the lads have recovered well and we’ll have a run-out this afternoon, off tomorrow and then again on Thursday. But from what I’ve seen, and the data backs it up, they’re in great shape.”

Maintaining this ‘no excuses’ mentality, Rowntree added that Munster had “heaps of positives” going into a third-successive semi-final against the back-to-back champions.

“We’re playing, we’re attacking, we’re challenging teams. We’re sticking to the plan of how we want to play and obviously we were helped by two red cards (against Connacht), but no, plenty of positives without giving the game away.”

“And you know, you’re going to ask me about the short turnaround, but it’s irrelevant really because we’re match-hardened now. We’ve played two good games and we’re ready Friday night for another one. We’ve recovered well and we’re battle ready for this game.”

“We’ve not spoke about the turnaround, we’re ready for another game. It’s coming on Friday night, it’s great for us. We’re ready. Having such a long time away from the game, suddenly we’re back into it and we’ve got another big game on Friday night and our performances in certain areas of the game are just getting better and better. We’re peaking at the right time, ready for knock-out rugby.”

Munster have lost at this stage for the last two years in succession against Leinster, both times in the RDS, but Rowntree was equally dismissive of the relevance past meetings will have on Friday.

In all of this Rowntree said that Munster can extract huge confidence from their performance in losing 27-25 to Leinster last Saturday week.

“Of course, that was a proper game that, wasn’t it? So heaps. That was our first hit-out since we played the Scarlets, we had no warm-up game, obviously, no internal game because we had a challenging 10 days leading into the return of rugby.

“So plenty of positives, we could have won that game and we’re gutted that we lost that game, that’s for sure. It’s given us momentum. We had a similar team playing at the weekend, so we’ve got momentum, we’ve got a settled team - as settled as you can be after two games - but certainly the lads are match ready, they’re hardened.

“We were a bit...I wouldn’t say anxious, but very mindful coming back into this programme after lockdown about body hardness and contact. But what they have shown is they are contact ready.”

For Damian de Allende, that game marked his debut in a Munster jersey when he and Chris Farrell had a compelling duel with the Leinster pairing of Robbie Henshaw and Garry Ringrose.

“They’re both world-class centres and both have been very good at international level as well,” said the South African of his opposing midfield combination.

“Leinster were very good, they put in some nice kicks behind us, they have very nice skills, so we know they can’t get caught at the breakdown. Sometimes you are committing too many guys, especially on our defensive line, so we know if we commit too many guys and we’re short on defence, they’ll exploit us very easily and they did so in that first game, so we need to be quite aware of that.

“They’re also very physical and very fast, both have very good feet, so we’ll have to be switched on with all cylinders to try and tame them as much as we can on Friday night.”

The 28-year-old arrived in Munster on the back of a rich run of success, having been part of the Springboks side that won the 2019 Rugby Championship and World Cup.

“For me, personally, no matter where I play I always strive to win tournaments and championships. I signed for Munster because I feel that they have the credentials and the coaching staff and the players and heart. From what I’ve seen on TV, obviously I’ve only played two games here, but I feel they have that team environment that they actually want to achieve.

“You could go to another squad where they have all the stars and the names in their team but it’s like they don’t want that success or they’re not working for that success. I feel, even before the two games, there’s a real energy and desire not just to get to a semi-final or final but to actually win semi-finals and finals. And not just once or twice, but consistently in Pro14 and Champions Cup as well.

“Friday night is going to be a very tough encounter but hopefully we will pitch up. It’s a short encounter but we know it’s just a mental thing. We haven’t played a lot of rugby over the last six months so there are going to be sore bodies, I think still on Thursday night.

“But if we get the right mindset and we pitch up on Friday night knowing we’ve got one opportunity and forgetting about everything in the past and not worrying about the final, just staying in the moment for 80 minutes and hopefully we can walk off with big smiles on our faces on Friday night.”

1 Maradona’s terrible, terminal journey from human to myth divided him in two
2 Autumn Nations Cup - Ireland v Georgia: TV details, kick-off time, team news and more
3 Andy Farrell hands Billy Burns first Ireland start against Georgia
4 All bets are on as America opens the gambling sluice gates and the dollars flow
5 Keith Duggan: Through the glories and the disgraces, we were all Maradona addicts
Real news has value SUBSCRIBE