Ireland head coach Joe Schmidt has said that his side "need to have some belief" that they can beat New Zealand in their upcoming Rugby World Cup quarter-final in Tokyo. Video: Reuters 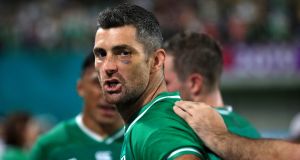 Kick-off: 11.15am Irish time, Saturday. Venue: Tokyo Stadium. How to follow: The Irish Times liveblog will begin at 10.30am. On TV: Live on Eir Sport and RTÉ2.

When Ireland beat the All Blacks for the first time on Irish soil at the Aviva stadium last November, optimism for this World Cup was at its zenith.

So it was that thousands more Irish fans began booking flights and tickets up to the quarter-final and even beyond, in the belief that this Irish team could boldly go where no Irish side had gone before in a World Cup.

In the assumption that Ireland would top Pool A and be playing in Sunday’s second of two quarter-finals in Tokyo this weekend, some of those fans may not have the match they had planned for, and hence the actual match tickets.

However it’s still distinctly encouraging that all but three of that Irish starting XV from last November have been picked for Saturday’s quarter-final in Yokohama Stadium.

The only exceptions are Iain Henderson, Robbie Henshaw and Conor Murray, and even at that, the Ulster lock replaced Devin Toner just past the hour against the All Blacks last November.

In Henshaw’s enforced absence that day, Bundee Aki started and had a blinder. It must be torturing the 29-year-old Aki that he has been ruled out of this once-in-a-lifetime quarter-final against the nation of his birth for a tackle that was punished with a red card against the country of his parents.

Aki will remain at the squad’s base in the Chiba prefecture adjacent to Disneyland as a fully active member in every aspect bar playing, and Simon Easterby has spoken of his value on the training pitch and elsewhere as a continuing member of this squad. But that must be small consolation for Aki himself.

Joe Schmidt admitted: “There’s probably four or five, or maybe half a dozen, really tight selections and you weigh up experience and past performances against particular opposition and you make a decision that’s as informed as you can make it. But you can’t guarantee they’re right.

“I think the 23 players that you pick can play very well and still not get the result against the All Blacks, such is the quality of players and athletes they possess,” said Schmidt, who nonetheless expressed the belief that this Irish team has the confidence within the group to believe they can win this quarter-final.

Schmidt referenced Chris Farrell, as well as Jean Kleyn, Jordi Murphy – who is two from two against the All Blacks –  and the outside backs, with Rob Kearney ahead of Jordan Larmour, as a few of those tight calls.

However, Henshaw was always the likelier choice to renew his Leinster midfield partnership with Garry Ringrose, finally rested against Samoa after four warm-up games and three World Cup matches in succession.

While Henshaw was clearly rusty in only his second game since May when returning from a tweaked hamstring against Samoa, he will surely benefit from that outing. Indeed, the knowledge that he is playing ahead of his suspended ex-Connacht team-mate and close friend will motivate him further.

The major issues facing Joe Schmidt and his assistants in selecting the starting XV to face the back-to-back world champions were in the backrow and the back three.

In the event, they have placed their trust in established combinations. After an impressive stint off the bench against Samoa, Peter O’Mahony is restored alongside Josh van der Flier and the indefatigable CJ Stander, in what was the same trio of loose forwards that started against the All Blacks last November.

No less than Andrew Conway, the squad’s leading try scorer at this World Cup, Jordan Larmour’s form must have made a case for his inclusion against the All Blacks. Then again Rob Kearney’s own sharpness and form (three tries in his last three Tests) made an equaling compelling case, added to which is his invaluable experience and proven big-match temperament.

So it is that he will again be at fullback, with Jacob Stockdale and Keith Earls, also in sharp form if curiously still tryless, as his wingmen.

It’s also 13 of the 15 which faced Japan in Ireland’s second Pool A match, a game which Johnny Sexton and Robbie Henshaw missed. In many respects, even the dogs in O’Connell Street probably would have guessed this team.

With Henderson now James Ryan’s established partner in what is showing signs of being one of the great Irish secondrows, the tight five picked itself as, of course, did the Murray-Sexton tactical axis at halfback.

This is an entirely fitting stage for Test rugby’s second most prolific halfback combination of all time to eclipse the Irish halfback record of 55 Tests together belonging to Peter Stringer and Ronan O’Gara. And there was nothing more encouraging about the assured win over Samoa than the sight of those two in prime form.

Indeed, all things considered, it’s doubtful if there is a more settled side in the 2019 World Cup than Ireland. Of course, that could be used a stick to beat them and Schmidt with if things go badly wrong, but more likely it will also count for something.