Rob Herring ready to ‘step up as a leader’ at Ulster 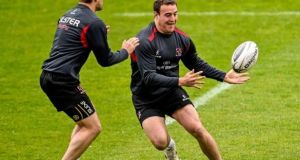 Rob Herring in training. ‘One of the things I’ve noticed is that where we are now and where we were last season is chalk and cheese,’ he says.

Ireland captain Rory Best will retire after the Rugby World Cup in Japan, so for the man who disputed the number two jersey with him over several seasons at the province, tonight’s captain Rob Herring, a new era beckons.

The summer signings, Irish international prop Jack McGrath, former Wallaby secondrow Sam Carter and New Zealand born utility back Matt Faddes will win first Ulster caps against the Ospreys in Belfast but for Herring there is a sense of a fresh beginning too.

Injury in a World Cup warm-up match cruelly denied him an opportunity to put forward a concerted argument for going to Japan but he’s emerged from the initial fug of disappointment with a resolve to prove that he is the best hooker in Ireland.

The South African born, Irish international admitted: “It’s been Rory and myself competing for the position and he’s obviously been captain and the number one hooker in Ireland; now that he’s gone I’ve got to take that opportunity. It starts with my games for Ulster and stepping up as a leader as well.

“One of the things I’ve noticed is that where we are now and where we were last season is chalk and cheese. The work ethic, the squad cohesion, it feels like a new place in a good way. That for me is so exciting.”

Craig Gilroy returns after 11 months on the sideline through injury in a strong Ulster side that includes Irish internationals Luke Marshall, John Cooney, McGrath, Kieran Treadwell, Jordi Murphy and Sean Reidy alongside talented young players like centre Jack Hume, Matty Rea and Michael Lowry, who starts on the bench.

The Ospreys, coached by former Ulster and Ireland hooker Allen Clarke, have travelled with a team that includes standout Welsh internationals Scott Williams and Dan Lydiate and in wing Keelan Giles boast one of the quickest players in the tournament.

Ulster will be keen and should manage to lay down a winning marker to the new season.