Rassie Erasmus: Felix Jones has key role in our setup 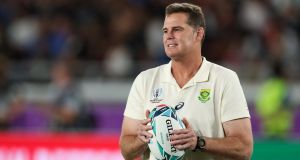 South Africa head coach Rassie Erasmus: ‘Apart from New Zealand, Ireland were the only other team who put a full 80 minutes out there of constructive, well planned, decisive, clinical rugby.’ Photograph: Craig Mercer/Inpho

Rassie Erasmus tried to play the game. There was a half-hearted attempt to paint South Africa’s next three fixtures at this World Cup, against Namibia, Italy and Canada, as something other than predetermined prints. History and logic stood in judgment against him. As did the team selection he had just revealed. He knew this. We knew this.

All told, 13 changes have been made to the team which started against New Zealand for the meeting with their African neighbours this weekend. Only Lukhanyo Am and Makazole Mapimpi will go again. The more damning evidence against a game which, he tried to sell us, will not be some glorified captain’s run is the fact that he has named Schalk Brits at number eight.

As in Schalk Brits, the hooker.

No, there wasn’t any way to hide the fact that this next three weeks will be all about rotating his squad, posting a few cricket scores and peaking for a likely quarter-final against Ireland. And so we got Rassie the smiling assassin here with a charm offensive that began with a gushing review of the performance which did for Scotland last weekend.

“Apart from New Zealand, Ireland were the only other team who put a full 80 minutes out there of constructive, well planned, decisive, clinical rugby,” he cooed. Classic Rassie. If Erasmus were American then every second sentence would kick in with an “aw shucks”. Don’t buy it. His coaching, his man management and his strategic faculties are far too bright to be hidden beneath a bushel or behind a projection of geniality.

His landing of Felix Jones was proof of that. Parachuted into the Springbok coaching setup after the abrupt loss of attack coach Swys De Bruin to health issues, Jones has slotted in seamlessly with Erasmus, for whom he first coached with Munster. He was added to the ticket with a very specific reason in mind, integrated with the precision of a surgeon’s scalpel.

“I sat down with the players and we said that we can’t change our attack philosophy now but we would really like to get somebody in and help us analyse the opposition’s defensive structures. We don’t really need that for the southern hemisphere teams because we play them on a regular basis.

“Knowing that we would probably play Scotland or Ireland or England, I coached with Felix at Munster for almost two years, I know how good he is and I know that he puts a lot in that, even on that Italian team because we played Treviso and those kind of teams. The analysis he does on individual players and defensive structures is really phenomenal.”

Jones’s knowledge of the European game, and the store placed in that by Erasmus, is telling. It may also be timely given the tournament to date has revealed a premium on defence and tactical kicking. These are attributes we normally associate with the northern hemisphere but even the All Blacks’s compass tilted that way with a more conservative approach against the Boks.

If that is in fact the case, and this tournament comes to be played out on terms, and in conditions, more akin to Champions Cup than Super Rugby, then Jones won’t be the only feather in the Boks cap. Defence coach Jacque Nienaber and Erasmus both have their time in Limerick to draw on and the latter has no doubt as to the benefits accrued.

“People underestimate Pro14 rugby. It is one of the toughest competitions I have coached in. It compares on all levels to Super Rugby because it is physical, tactical, it is different styles every week. There is a Scottish coach and a Welsh referee and then you are playing in Italy and then it’s different travel times. It is sometimes different weather. It’s different pitches, sometimes 4G pitches. You have to adapt and analyse every weekend.”

This need to adapt extended beyond the coaches’ box and Erasmus appreciated that. Learned from it. He saw an Irish system working off no more than 160 professional players and one that was predicated on squeezing every last drop out of each one. He has imported some of what he learned while in Limerick and recognises the role that sojourn has played.

“I became a better coach in Ireland,” he said.

How much better we will soon see. You suspect South Africa will need to show more than they had against the All Blacks to win this World Cup. Matthew Proudfoot, another of Erasmus’s assistants, has already said that New Zealand will evolve this next month or more. It follows then that the Springboks will have to follow suit. That box kicks, big hits and turnovers won’t be enough.

This is where it gets tricky. South Africa tried to play the New Zealand way before and the consequences included 28-, 42- and 57-point defeats to the world champions. The Boks are what they are and they are where they are, a side still fancied to make it through to the final in November, because they work to their strengths and understand their weaknesses.

A balance may have to be found but where and how?

It’s a conundrum for a coach whose team was actually beaten at their own game in Yokohama. New Zealand kicked more than them. The reigning champions spent long stretches of the evening defending and went for the kill off the counters. South Africa have, like Ireland, been criticised for an absence of a Plan B but what does it matter if the Kiwis can beat you with your own Plan A?

“They are the number one team in the world,” said Erasmus. “If we manage to get through the stages and meet them again there are things that we can manage to overcome with the personnel and the style of rugby we play, but I fully take on board that there are some things we have to change if we want to win this World Cup.”