Letter from Japan: The wheels come off over-politeness in Toyota City

Flawed human nature is rare in Japan, so it was strange to see how police handled drunken violence 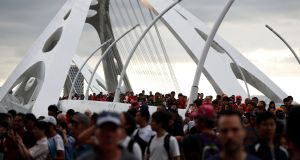 Rugby fans arriving at City of Toyota Stadium ahead of the World Cup match between Wales and Georgia on September 23th. Photograph: Adrian Dennis/AFP/Getty Images

Dear Pat. The answer to your query on The Added Time podcast is 1959; that’s when the corporation erased a city’s name. And perhaps its soul.

The souped-up blacked-out alloy-wheeled motor with booming sound system loops past us on the main drag of Toyota City. Nobody seems to notice the low rider. Not the peacefully dispersing Welsh. Not the keystone cops.

A strange night in the Aichi Prefecture was only beginning. Witnessing how they handle drunken violence was very revealing. Flawed human nature is a rare gem in Japan.

AA Gill was on the money. “After 10 minutes in the land of the rising sun you realize the [Japanese] are off the map, out of the game, on another planet,” wrote the devilishly cool food critic in 2001. “It’s not that they’re aliens, but they are the people that aliens might be if they’d learnt human by correspondence course and wanted to slip in unnoticed.”

Gill’s wonderfully harsh Mad in Japan essay drew a formal protest from the ambassador – always with the formality – but the “have no doubts, they’re not happy” line rings true.

The “no phone conversations” on the train rule, so commuters can nap, is actually a clever if non-transferable idea.

“How do they wake up?” our editor inquired.

How do they wake up from this dream state?

Constant, acute politeness cannot be genuine. There’s joy in encountering a Japanese service industry worker who is naturally enthusiastic because it supports the suspicion that the other 98.2 per cent are programmed by the matrix.

This all changes when the crescent moon rises. Kanpai!

The old man on the train, en route to watch Wales crush Georgia, told two stories. One about the gargantuan car factory on the edge of town and another about Suzuki Shosan, a samurai who became a Zen Buddhist monk hailed from this rural district.

The old man was enjoying his English gymnastics. We get this daily.

He sees the accreditation.

Don’t worry if you never heard of the 17th century warrior priest, neither have the advertising geniuses using this World Cup to dress up rugby players in traditional armour so they can conquer Mount Fuji.

“You have no idea how much, how deeply, they despise us,” an Englishman living in Japan told Gill. “Don’t be fooled by the politeness: it’s mockery.”

We see that now.

Anyhow, Monday night in Koromo – that was its name until changed to please the car executives – to cover Wales versus Georgia was worth the trip considering what happened on the slow stroll home.

“No photoes, movies” read the volunteer’s sign in the press box. The Irish Indo snapped and tweeted. Rules are forever rules in Japan, but we finally grasped the difference between Ireland and Japan. Dublin would never rename itself Guinness City. Then again, nothing is sacred anymore. Greed overpowers culture everywhere we roam.

After filing copy on the hoof – the stadiums are shut down before any journalist worth their salt can finish – we were shuttled to our central hotel, quickly realising only three options remained for a late pint. The Mexican restaurant had Wales hooker Ken Owens and pals camped at the bar. Boobies British Pub had the last 50-odd red shirts who had not immediately returned to Nagoya.

We went for a Japanese delicacy: cans on the street. Picking up two baby Asahis from the shop, we sat across from Boobies, where Land of My Fathers occasionally interrupted the silence as these glowing Welsh finally put the Rob Howley betting scandal in their rear view.

Along with Sarah Mockford from Rugby World magazine and Rich Freeman, who really should be on the Japanese tourist board’s payroll, a kerb-side bench became our perch. Rich’s presence avoided any awkwardness beside two merry locals as he danced between languages. Cuplá focail always calms suspicions minds.

The first flashing police car – a Toyota Crown GRS 180 – arrived at around 1am. Maybe the high-rise apartments complained. When the second vehicle parked up four unusually small officers, even by Japan size, marched into the friendly crowd and began screaming at them. It was unnecessary and so obviously clueless to how supporters behave at a major tournament on main street post-match.

Is this a city or a corporation’s construct?

In the middle of the road between us and Boobies there appeared an enraged Japanese man without any trousers or shoes. He was wielding one brogue like Shosan’s sword at the battle of Osaka. No way this was ending well. He was blitzed, After he was slammed up against the police vehicle, two of the officers paused their Welsh herding to chide the man’s two friends.

“Why’s he so angry?” Sarah wondered.

“Back home the paddy wagon would be here by now,” I smugly surmised.

“He’s Japanese so he’s not a problem,” Rich explained, “It’s those naughty foreigners singing that are the problem. Welcome to my world.”

What happened next was so insane. Instead of arresting the buckled samurai, the police moved their car 10 metres, before returning to the task of intimidating the gaijin (non-Japanese). The Wales team hotel was nearby so many of the gathering were friends and family of the players.

When the third Toyota arrived Mr Angry demanded incarceration by climbing up on an invisible mound and pitching his shoe into the windscreen. Still no handcuffs. Six officers abandoned their corralling of innocents to surround him. They attempted to placate despite witnessing their vehicles being damaged.

The head-butt forced them to ground and bundle him into the back seat as his companions were escorted into the tardy paddy wagon.

“Japan is a lunatic asylum built on a hideous history, vile philosophy and straitjacket culture,” wrote Gill. “If Freud had lived in Tokyo we’d never have got analysis.”

Souped-up blacked-out alloy-wheeled motor with booming sounds loops past again. Invisible to the police, he takes a good gawk at us. That was our cue. We’d seen enough.